Newsletter
Sign Up today for our FREE Newsletter and get the latest articles and news delivered right to your inbox.
Home » Albuquerque Super Show 2019 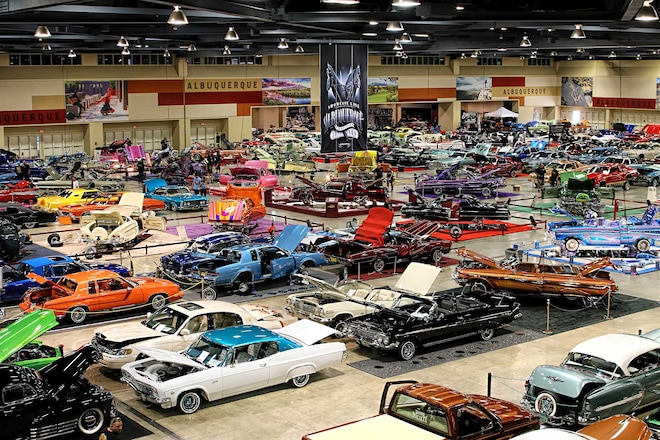 Albuquerque is the largest city in New Mexico. With a population of close to 1 million people, you can bet your bottom dollar that there’s a decent amount of lowrider fans mixed into those numbers. That said, they also have a place to celebrate lowrider culture, and it comes by way of Artemis Promotions. They are the minds behind the Albuquerque Super Show and their growth over five years has been phenomenal.

Upon arriving at the Albuquerque Convention Center, guests are greeted by the Lowrider Rig. After passing through security, you will find yourself smack in the middle of the main venue and ready to stroll Showcase Lane. Some of the notable rides from this year’s event includes Bobby Garza’s Lowrider of the Year (Double Trouble) and then came the army of cars from Goodtimes, Rollerz Only, Lifestyle, and High Class.

Also on display was a car that hasn’t been seen since the early ’00s—”Casanova.” For those of you who don’t know the history of this car, it was three-time Lowrider Euro of the Year. Owned by George Jaramillio, his plans were to rebuild the car and take another title but unfortunately he passed away before getting a chance to do so. To fulfill his legacy, “Casanova” was completed by an old friend who took his time capturing the final vision of what George wanted to accomplish.

Car clubs all over the southwest were spotted and it was High Class who stepped up to the plate and brought out roughly 40 cars. Another highlight of the show was the appearance of Lifestyle Car Club who graced both the showroom and Showcase Lane while New Mexico Car Club took home the Best Club display with their fine line of Chevys, including the club president’s (Carlos Munoz) 1955 Chevy convertible, which was completed just hours before the show officially opened.

If you came for the action, the hop pit was where it was at. Almost 30 cars were hitting switches for a good portion of the afternoon. Everything from street cruisers to radicals were trying to hit that infamous back bumper and, in the end, Fernando Ortega took home top honors and the Lowkey Belt by hitting 130 inches with his purple El Camino.

This year’s show had over 450 exhibitors registered and over 6,000 people in attendance. The show is getting so big that they are currently in talks to expand the venue for 2020. Once again, Lowrider would like to thank Artemis Promotions for putting on one great show. We’re already looking forward to next year.