Newsletter
Sign Up today for our FREE Newsletter and get the latest articles and news delivered right to your inbox.
Home » Pride C.C and Society C.C. join forces for 4th Annual Arizona Car Clubs’ BBQ Get Together 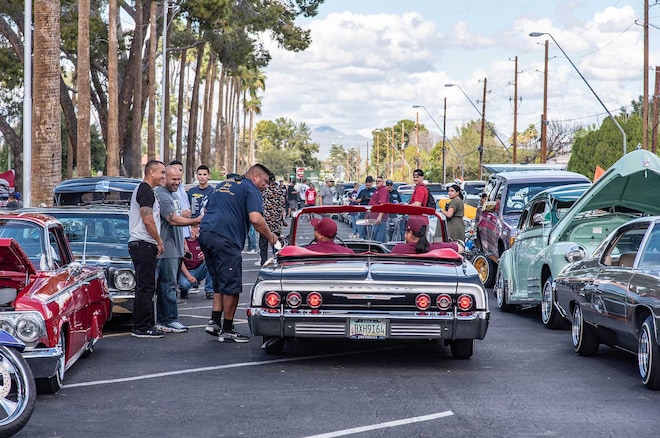 The Spring season in Arizona always brings the baddest rides and BBQ aroma from the mass of Arizona Car Clubs that make their way to iconic Pioneer Park in Mesa. The Pride CC has held an annual picnic at the park for the past 3 years and this year, they invited Society CC to join forces with them for their 4th gathering.

Pioneer Park is home to the cruising scenes that were held since way back in the 70’s, and also the Birthplace of Pride CC. All kinds of different clubs from near and far came cruising right into a perfectly beautiful Sunday afternoon get together.

Forty-five years later, Pride CC founder John (Bully) Rios and Company along with Society CC brought back the sounds of the 70’s, 80’s, and 90’s with a Car Club Picnic featuring over twenty-five clubs and thousands of Lowrider fans filling the park that day with over 200 rides laying in the grass. When it comes to sounds in Arizona, well, there is no music unless its played by DJ Ray and he was in jam mode at the park.

The day’s activities also featured awards for the Best Car Club camp set ups. Phoeniquera Classics took top honors, 2nd went to Klique CC, and Our Town CC took 3rd place! The BBQ Cook-off competition was judged by 3 celebrity judges; Willie from Old School City along with Oscar and Erika, who travel world-wide in food tastings! When it was over, 1st place was earned by Society CC, 2nd place went to the Ultimate Impressions, and 3rd place was awarded to the Uniques CC who traveled all the way out from California’s Inland Empire.

The day was full of great food and great people who enjoyed this Lowrider happening as a means to escape from the soon-to-be social distancing standards. It was a no handshake day at this park gathering, so everyone did the Lowrider head nod or Q-vo! Little did we know this BBQ & Show would be the last public event for Mesa and the State of Arizona due to our now current health crisis.

We would like to thank our contributors and sponsors Motorsport Showcase, Old School City, Bully’s Upholstery, Supreme Seventies, and of course Pride and Society Car Clubs for making this event a total success!