Newsletter
Sign Up today for our FREE Newsletter and get the latest articles and news delivered right to your inbox.
Home » The 48th Annual Lowrider Tejano Super Show 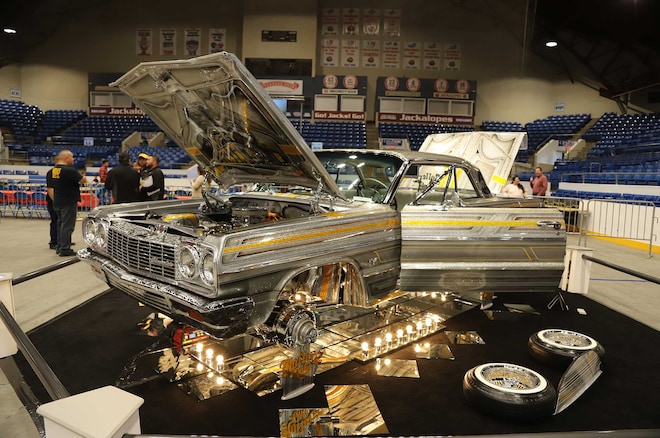 ’06 Hall of Fame Honoree, Taste of Latin car club founder, and Texas Tours Entertainment Promoter, Nick Hernandez kicked off his incredible 48th annual Tejano Super Show at the Ector County Coliseum, in Odessa, Tx. For almost five decades this man has accomplished what no other Lowrider pioneer has ever done.

Always a very proud Leader within the Lowrider community, Nick has been the face of Lowrider Legend, representing Texas, and is an example for the Lowrider Culture. Just like shows of past, this number 48 spectacular brought out 5 halls of custom and classic cars, trucks, and bikes, as well as the continuous live on-stage entertainment featuring King Lil G, AJ Castillo, James Edward Sanchez & Los Marceles, Tiny B and Brittany Nicole.

As in all Years past, a prayer by hundreds of spectators was followed by the notorious Hopping Contest. This show always has a festival type atmosphere so there was plenty of Tex-Mex food and lowrider accessories and clothing booths. High Class Car Club traveled the twenty-some hour road trip to Odessa to take over the show with their always radical chrome suspensions on display. And when it comes to supporting this show, you can always depend on the Techniques car club to make their annual journey from L.A., not only for the support of the event, but because they are part of the show itself.

I’ve made it out to this show quite a few times and it has always been an honor because everyone welcomes you like family, and the hospitality and sincerity is very humbling as well. Before this show opens its gates to all the faithful fans, the city council, military vets, and charity organizations are all at hand for a special, beautiful ceremony that acknowledges the history of Lowriding and its culture in Odessa. Nick Hernandez is very grateful for the patronage he receives and after a few speeches, he cuts the huge red ribbon to welcome yet another special, yearly event.

Motorsport showcase and the Lowrider Network Car Show judges were there this year not just to judge vehicles from every indoor location of Ector Coliseum, but also to have a roundtable session to meet the judges, go over the new rules for the 2020 show season, and generate a collaboration between car builders and judging views as the lowrider quality standard continues to move upward.

Getting to know your Lowrider Judges and their perspective views on detail will always help the Lowrider builder to best understand the right direction a build should be moving toward. It helps to know that you don’t always have to build a car or truck to achieve maximum points in all categories to win, either. Most of the time they will tell you that craftmanship also makes the winner. Richard and Danny Ochoa, along with Texas Ed and their staff, have an enormous amount of experience, and they are always open to conversations regarding car show judging. They do it for the passion they have for the artistry of lowriding just Like Nick Hernandez does. Enjoy the view of all the rides and we’ll see you at the 49th!!