Newsletter
Sign Up today for our FREE Newsletter and get the latest articles and news delivered right to your inbox.
Home » 45th Chicano Park Day 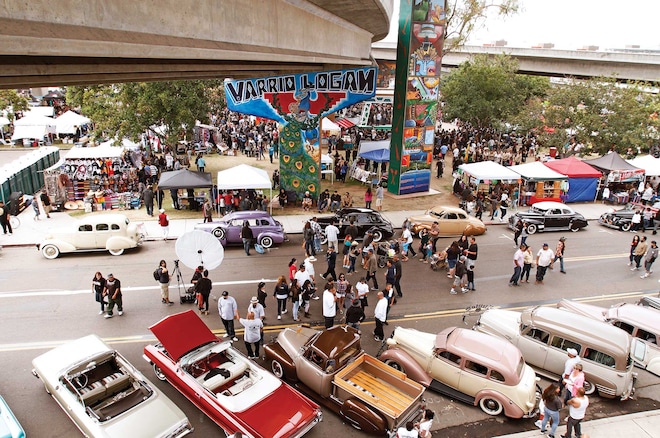 On Saturday, April 25, 2015 the city of San Diego celebrated the 45th Chicano Park Day. The historic park is located south of downtown San Diego, under the San Diego-Coronado Bridge. I’ve heard about the Chicano Park celebration for many years, but was never able to make it until this weekend. As soon as we took the Cesar E. Chavez Parkway exit off I-5, we could see a large crowd walking toward Chicano Park. Spectators took advantage of the free entry and brought out their entire family to enjoy the day’s events that included traditional music, dance, live bands, guest speakers, a kids art workshop, and of course lowriders.

Viejitos car club had a sea of bombs at the northern entrance of the park. They had every style and year of bomb, but the one that stood out was Johnny B. Good’s 1936 Packard convertible. The extremely rare bomb sat on the floor and its luxurious grille was highlighted in between a pair of ’57 Bel Airs.

Klique car club was also in full effect at the show. They were posted up in their usual picnic table area, surrounded by their high-caliber cars. On the southern end of Chicano Park, the Majestics were all together at the first house after passing Chicano Park and this year’s celebration reached past the house. They had a DJ setup, tables under canopies, a large barbeque area, and their own port-a-potties. Since they were technically on their own property, they didn’t have to worry about the strict alcohol laws that were being enforced in the park.

I’d like to thank all the San Diego car clubs for making my first Chicano Park Day a memorable one and we will see everyone next year.