Newsletter
Sign Up today for our FREE Newsletter and get the latest articles and news delivered right to your inbox.
Home » 2020 Grand National Roadster & Lowrider Show 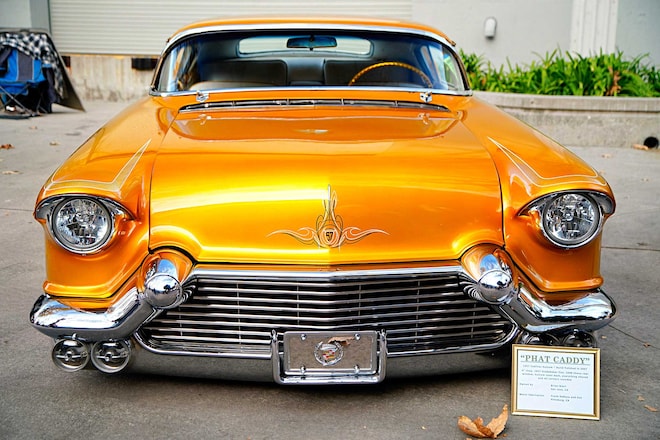 The 2020 Grand National Roadster Show (GNRS) is the first major event to wake us from our winter slumber. It’s the show that helps ring in the New Year and has hundreds of builders scrambling to get their rides dialed in. For over 70 years, the GNRS continues to be one of the most coveted shows on earth, and it’s with good reason. The GNRS assembles the most beautiful collection of classic cars, street rods, custom builds, and lowriders, and one of the highlights has to be the camaraderie found amidst the crowd.

Of particular interest to us is Building 8—best known as the location which houses a good number of lowriders. This year, one of the main attractions was Jonathan Mercado’s 1964 Buick Riviera. It was the car’s debut and it boasted a dazzling, multi-colored theme that was powered by House of Kolor. A few cars away was a 1966 Chevrolet Impala owned by Arnold Rodriguez that was also featured within the Lifestyle car club line up which has been supporting this event since it left Oakland. Other notable builds included the “62 Psalms” Impala and Angelica’s  ’54 Bel Air which seemed to have more than its fair share of admirers.

As we walked from hall to hall, a sprinkling of lowriders made themselves known, and among the clubs in attendance for this perfect indoor and outdoor atmosphere location was the Groupe, Spirit, Travel Team, Oldies, and Pharaohs, to name a few.  With over 700 cars on display, the GNRS continues to be a staple in ringing in the New Year, and it’s the one show that continually raises the bar and gives the crowd what they came for.