Newsletter
Sign Up today for our FREE Newsletter and get the latest articles and news delivered right to your inbox.
Home » 2019 Tavares Family Super Show 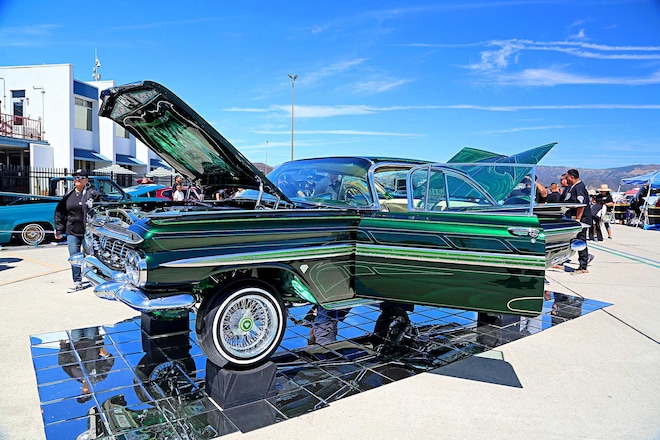 A lot can change in a couple of years, especially if you are self-motivated, willing to put in the work and determined to make an impact. It’s not a mission for the faint of heart, but for those willing to accept those challenges the sky is the limit and Pete Tavares of Salinas is a prime example.

I first met Pete about four years ago. At the time all I knew was that he was a business owner, proud father and basically a one man car club. He had explained to me that one of his life goals was to build a car for each of his kids so they could cruise together. Since then, they’ve grown to fifteen members that share a like-minded vision to invest into their communities and deliver a positive impact.

After hosting last year’s Salinas Show, the group got together and decided it was time to up the ante. They wanted to expand the reach of their show so they called up George Torres to see how they could make their show an Official Lowrider Tour Stop. A few phone calls, and a few meetings later, the deal was done and now The Tavares Family Super Show is set to be the first Lowrider Sanctioned show to come to Salinas—and the last stop before the Las Vegas Super Show.

Well that day finally arrived and we were there to bear witness to its greatness. During the early hours of the show, a misty fog draped the roll in but it cleared up just in time for the opening. As spectators piled their way in, they were treated to over 800 cars on display. While most of the cars were from Nor Cal, a few clubs from So Cal took the trip as well as some entrants taking the long haul from Texas. Bobby Garza from Goodtimes brought both his Lowrider of the Year winners, “Double Trouble” and “RM Series,” while Chris Roark bought out his duo of title wining ’58’s, “Final Score” and “Dark Side.” This year, a new car to breakout at the show was a green 1959 Impala named “Krypto 9” from Traditionals Car Club and it wound up taking third place for “Best of Show” and in the process qualified for the Lowrider of the Year title in Las Vegas.

Over at the hop, almost a dozen cars shared part of the $5,000 cash and prizes while the stage held performances from Trish Toledo, Los Cadetes and Rose Royce. Needless to say, the Tavares Family Super Show was a complete success and they’ve already got to planning for next year’s show so clear you calendar because you won’t want to miss out!