Newsletter
Sign Up today for our FREE Newsletter and get the latest articles and news delivered right to your inbox.
Home » 2019 Redlands Meat Up 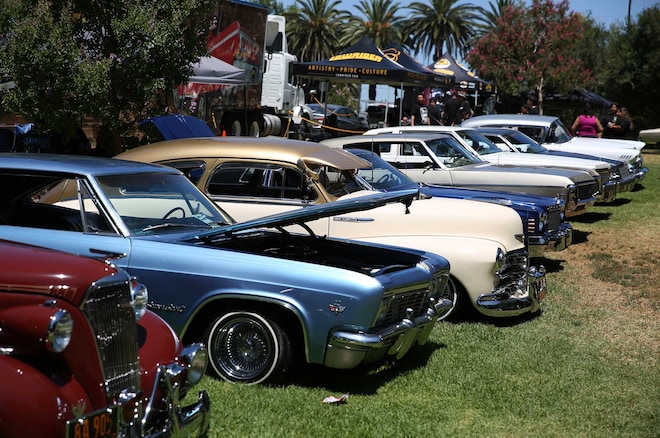 Nearby residents of Sylvan Park woke up to the mouthwatering aroma of dozens of barbecue’s bellowing smoke from their custom-made recipes. But this was no ordinary barbecue; this was the Lowrider magazine’s Meat Up hosted by the Redlands Car Club, and it all went down under the shade of trees that covered us from the brutal Inland Empire heat. The event, which is sponsored by Quaker State, is a part of an ongoing series which visits different neighborhoods and this one kicked off big. Redlands Car Club founder Gus Gonzalez explained to us how his car club is small but full of passionate car enthusiasts that like to give back to their community and their support was enormous and much appreciated.

We had the Lowrider rig parked on Chapel Street, and right next to us was the Quaker State giveaway booth. Now if you’ve never been, the Quaker State booth always sports long lines as enthusiasts wait their turn to spin the wheel and win one of many cool prizes. The park was full of car clubs from all over the Inland Empire that included Early Pride, Suavesitos, Dawg Pound, Travel Team, Riverside, Klique, Oldie Style, Contagious, Nite Owls, Uniques, Techniques, LA Times, Lifestyle, Majestics, One Way, Firme Classics, Majestics, Established and many more. The Redlands car club had a huge taco setup where they sold tacos, which helped them cover their cost for the event and the rest was donated to their community. “Not only do we support our local police and fire departments, but we also help with the Redlands Christmas Parade and it’s an awesome one at that,” says Gus.

This year’s festivities closed off in a good way, and if you haven’t been to one of our Meat Up series, then don’t miss out because we’re bringing back the old-school format of grillin’ and chillin’ in the park.

Albuquerque’s Car Clubs And The Colorado Rockies Triple A Team Are A Home Run!