Newsletter
Sign Up today for our FREE Newsletter and get the latest articles and news delivered right to your inbox.
Home » 2019 Las Vegas Super Show 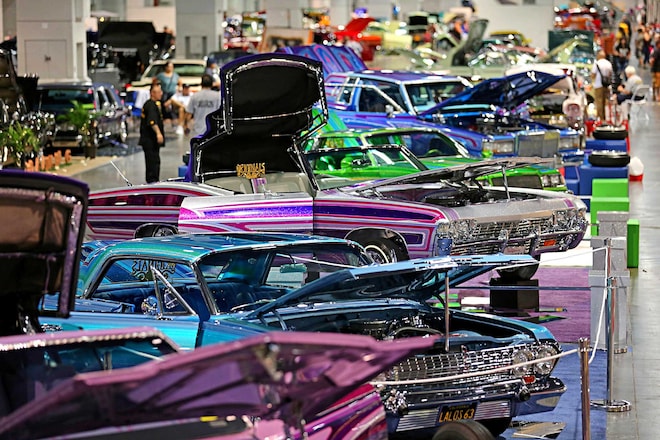 Let’s keep it simple. Last year was our first attempt to relocate the Lowrider Super Show to the Convention Center. We did so with disastrous results, yet rather than beat a dead horse with excuses, we apologized, strategized and came back with a new plan. Well this year, we implemented our new logistics and they proved to be successful. With Motorsport Showcase handling the move-in, it only took an average wait time of 30-minutes, this is an unheard of feat for a show of this magnitude and we still have plans to make it even better.

With Friday and Saturday roll-ins flowing with ease, the show was prepped and ready for Sunday’s spectators. On the morning of the show, a line had already formed in front of South Hall, and upon entry they were greeted to over 700 show rides and isle after isle of vendor booths. Among the usual suspects, were sponsors such as Hoppos, DGA, Logos Two and Krazy Kutting and located just next to the booths was a stage where local mariachi played before artists such as Lighter Shade of Brown and MC Magic took the stage. With WC of Westside Connection headlining the show, it was an all-out affair that brought back the memories and great music of yesteryear.

Highlights of the show include

The all-indoor show proved to be a successful one, and as we plan for something bigger and better in 2020, you can be rest assured that we’ve learned from our mistakes and are here to make up for lost time. With Joe Ray at the helm of our brand, he’s looking for an exciting 2020 and had this to say about the Super Show, “I said it was going to be a super event and it could have never of happened without the man upstairs and all the people who continue to support our brand and our events. This is what happens when we all join together. This is what happens when we’re not pulling each other down.”

With that said, we’d like to thank everyone for their continued support and don’t forget to log on to LowriderShows.com to see our 2020 Tour that kicks off next month in College Station, TX. The best has yet to come folks. Trust us on this.