Newsletter
Sign Up today for our FREE Newsletter and get the latest articles and news delivered right to your inbox.
Home » 2019 Arizona Super Show 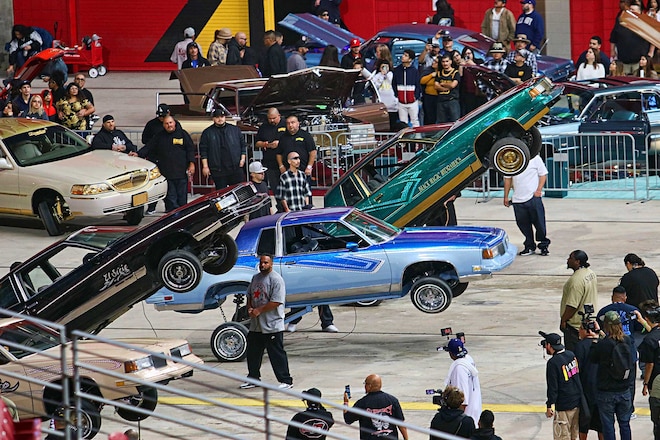 The 2019 Lowrider Magazine Tour kicked off with the Arizona Super Show and over 900 preregistered rides arriving from coast to coast. This year was set to be the biggest one to date. Unfortunately, Mother Nature pissed on our parade and also served us a healthy dose of rain days prior to the show. Many of the cars coming from Northern California had to be rerouted as the grapevine was closed due to snow, but eventually things cleared up and on the day of the show we were given a break and treated to clear skies.

The gates opened up at noon and entrants flooded the main floor featuring over 200 show rides. Bobby Garza had both of his Lowrider of the Year winners from Goodtimes, Jesse Goria, also from Goodtimes, broke out his newly redone 1961 Impala called “Overnight Celebrity,” and making the trek all the way from Philadelphia was Craig Montgomery’s 1963 Impala he named “Brotherly Love.” Platinum Car Club had a nice line of rides ranging from 1956-1965 and they were all lined up categorically by years.

Another club that showed strong was Uniques who broke out a new yellow 1962 Impala convertible owned by Rafael Enriquez, while the south end of the main floor was occupied by the usual suspects: Krazy Kutting, Logos Two, Lowrider Clothing, and a few others.

By the time the clock hit 2 p.m. the crowd was already in huge anticipation of the biggest lowrider hop in the country. With over 50 hoppers and some of the most celebrated names in the game, this was a special attraction with some real heavy hitters. Mike Thiessen broke out his freshly built 1961 Impala convertible and let me tell you this was no run-of-the-mill joint. His 1961 is a show-caliber car that should have been placed on a turntable, but Mike had different intentions and brought it to hop. Meanwhile OG Hyro of the Individuals broke out a full show hopper, complete with his trademark candy green and gold combo, and let me tell you his ’90s Cadillac had enough gold to make Slick Rick jealous; he hit the back bumper with ease.

Once the hop was complete, the concert kicked off with Zapp, MC Magic, Baby Bash taking the stage and the show finished off when a grand finale from the King of the Accordion, Ramon Ayala.

Under the continuing health guidance of the state of Nevada and the Las Vegas Convention Center, the 2020 Lowrider Las Vegas Super Show will not take place as originally scheduled