Newsletter
Sign Up today for our FREE Newsletter and get the latest articles and news delivered right to your inbox.
Home » 2018 Midwest Supershow 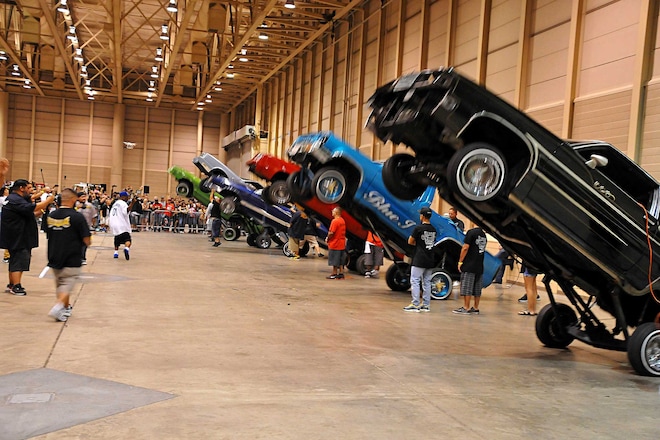 Started by Kyle Redus of Rollerz Only in 2012, the Midwest Supershow has been a staple for Lowrider shows in the Midwest since the show’s inception. It was originally located at Watson Park in Wichita, Kansas until one of the partners, Jose Ceballos, approached Kyle about bringing the growing show into an indoor location. With the help of Pat Benware, Kyle and Jose were able to relocate the Midwest Supershow to Century II Performing Arts & Convention Center in downtown Wichita.

In the second year at the convention center, the “Three Wise Men,” built a following and brand that is becoming the largest in the Midwest. The sponsors onboard were TNT Auto Center, Danny Boys Liquor, 92.7 The Blast, Metro PCS and Speedy Cash. Tiffany Rufe introduced many people to Emma’s Army, a group founded because her niece was lost due to child abuse. Blue chairs were set up to symbolize the children that didn’t have a voice and raise awareness to the growing tragedy of child abuse.

Over 300 vehicles lined the inside of the three-hall convention center with quality in each section. Professional boxer and Olympic medalist Nico Hernandez did “Meet and Greets” and signed autographs for fans throughout the day. On the stage performing was a Selena cover band, Brown Boy, Mike Jones and Paul Wall giving the show goers plenty of musical options. Sed Low Key TV gave out their hopping belt for highest car and truck hop as well as bumper checks going to John Robles at 101-inches and Felix Perez, respectively. RNR raffled off a set of wheels and tires worth up to $2500 for one lucky winner.

Kyle, Jose and Pat wish to thank everyone who came out to make Midwest Supershow the king of the Midwest with their annual event. Kansas may originally have been where Dorothy and her dog were swept away from, but with the excitement going on at the convention center that weekend, there’s no wonder she was eager to click her heels and return home. For more information and show dates for next year, log on to www.MidwestSupershow.com.