Newsletter
Sign Up today for our FREE Newsletter and get the latest articles and news delivered right to your inbox.
Home » 2018 Miami Super Show 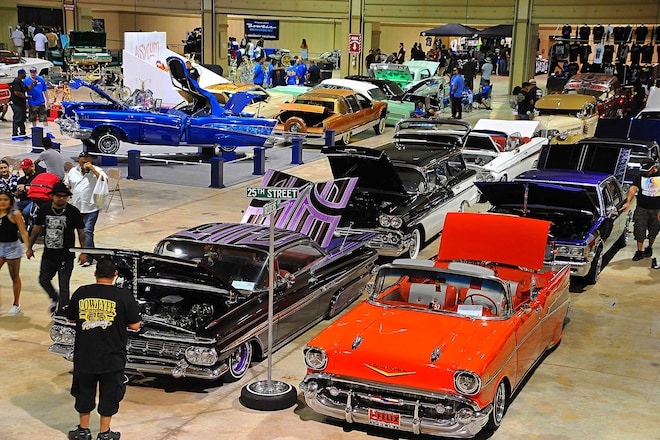 The Miami Lowrider Show started in the ’90s as our circuit opener and after a short hiatus we came back in 2016—let’s just say we picked up right where we left off. Now celebrating our third year back, we’ve made the Miami Dade County Fair and Expo Center our home, and the show was proper.

Show highlights include Bobby Garza’s (Good Times) 1957 Chevy Bel Air from Texas, Johnny Salters (SouthSide) proudly showcased his 1956 Chevy Impala convertible, while Kyle Giuffre took the top down on his 1961. In addition to the hundreds of other cars on display, attendees were treated to vendors, music, food, as well as the opportunity to get posters signed by Georjah Jaymes, who flew in from Canada to sign autographs and pose beside cars.

With three large halls filled with custom cars and trucks, the 2018 Lowrider Miami Show was an immense success. Outside, a hop competition brought out some stiff competition, including Willy from Hoppers, Frank from Red’s Hydraulics, and Rooster from Majestics. Once the hop competition was over, all three joined forces for a three-way hop that capped off the amazing day.

Lowrider magazine wishes to thank all the clubs in attendance as well as everyone who came through the gates to see the best of the best in 2018. For more information or show dates, log onto www.miamilowridercarshow.com.