Newsletter
Sign Up today for our FREE Newsletter and get the latest articles and news delivered right to your inbox.
Home » 2018 La Vuelta Summer Festival 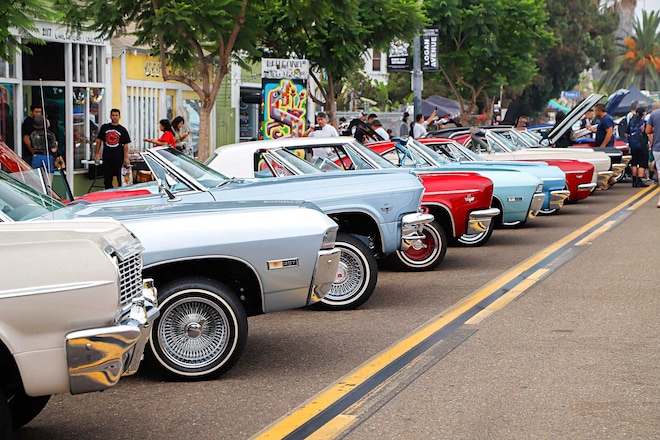 In 1970, when the residents in San Diego’s Barrio Logan held a non-violent protest to keep city officials from breaking their promise to build a community park, they believed they were fighting a cultural battle to protect their way of life. Nestled among industrial buildings and shipyards, this small Chicano hub had degraded throughout the ’50s and ’60s. But after that peaceful civil disobedience displayed in April 1970, Barrio Logan began rising up, eventually becoming the cultural powerhouse we know it to be today, with the now infamous Chicano Park serving as the “crown jewel” of the community.

This sense of culture is never more evident than at the La Vuelta Car Cruise. Held every other Wednesday during summer months, this event brings lowriders, bombs, and other custom cars to cruise down Logan Avenue. At the end of summer, on the last weekend in August 2018, the La Vuelta Summer Festival brought the cruise to a whole new level. Dozens of car clubs and hundreds of cars lined the iconic street as they framed the many food and cultural merchandise vendors. Two outdoor stages welcomed a variety of musical greats, such as the B-Side Players, Lil Rob, East L.A.’s Casa de Calacas, and even the Southwest High School Mariachi Estado de Oro, among many more.

La Vuelta Car Cruise Summer Festival has become a unique showcase for cultural art exhibits for local chicano artists, at the same time including the classic car show, ballet folklorico, and Aztec dancers. Attendees and participants alike all felt the sense of pride and cultural remembrance that those protesting community members fought so hard to protect. And as this event grows and gains notoriety, so will grow the love for unity, art, and cruising.