Newsletter
Sign Up today for our FREE Newsletter and get the latest articles and news delivered right to your inbox.
Home » 2018 Grand National Roadster Show 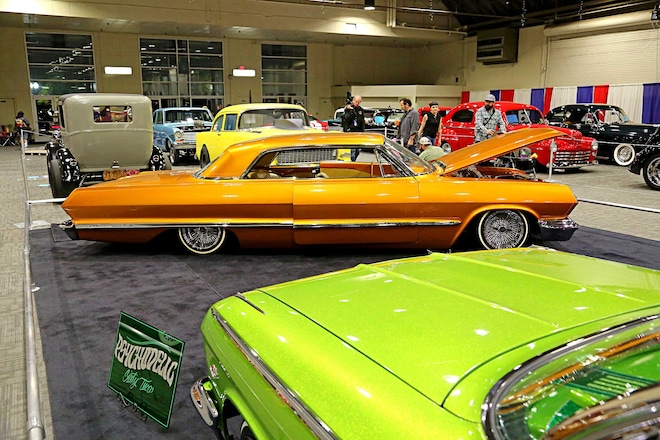 Since 2003, the Grand National Roadster Show (GNRS) has been taking place at the Pomona Fairplex, but it was originally an Oakland-based car show. The GNRS was originally organized to showcase new car models for returning World War II soldiers, with the extra spaces being given to local car clubs. At the first show the crowds walked past all the new cars and headed straight to the custom rides. The very next year the dealership cars were dropped and the GNRS was born.

Building 4 is the main building that hosts the AMBR (America’s Most Beautiful Roadster) contenders, but we were more interested with the lowrider cars in attendance.

One of the clubs that consistently attends the show is Lifestyle Car Club. Their bright, intricate candy-patterned paintjobs are always a crowd favorite at this show. The lineup started off with Luis Lemus’ yellow 1964 called “House of the Holy,” which took home First Place in Lowrider Hardtop Custom. The Lifestyle lineup ended with a chopped 1963 Impala owned by Richie Valles who took the Radical Lowrider Custom award. In the same building was the Kronies Car Club who had a mixture of lowriders and dub-style rides, but all of them sitting on the floor. Wino’s Only Car Club had their set of convertibles at the entrance of Building 8. Anthony Fuentes had his lavender 1955 Bel Air convertible on full display and took home First Place in the Lowrider Convertible Custom class.

The Tovars also never miss this show, and for the last couple of years the four brothers have had a new laid-out bomb displayed at the show. This year was the first time the brothers didn’t come out with one, but second-generation Daniel Tovar brought out his slammed 1937 Chevy and continued with the family tradition.

What makes the GNRS show so unique is that it caters to hot rods, rat rods, trucks, bikes, muscle cars, and, of course, lowriders. All forms of American car culture are all found under one roof … or in this case under seven roofs.