Newsletter
Sign Up today for our FREE Newsletter and get the latest articles and news delivered right to your inbox.
Home » 2018 Detroit Autorama 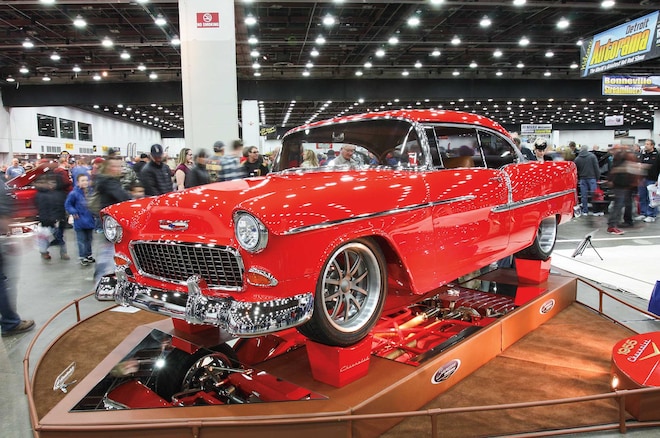 Every car show is a look back. We go there to see vehicles from the past built in a style from some other point in the past—like 1932 Fords built ’50s style or 1955 Chevys built ’60s style. You get the idea. Every winter, the Detroit Autorama combines a look back with a look forward. The vehicles participating in the Cavalcade of Customs, the Autorama Extreme, various club displays, and hundreds of others filling downtown Detroit’s Cobo Center satisfy our taste for nostalgia. In addition to the tradition, the brand-new builds competing for the Pirelli Great 8 and the Ridler Award provide a look to the future. Those up-to-date rods show us where our hobby is today and where it’s going.

This year’s special display was dedicated to Bonneville Salt Flats Streamliners. The fastest cars on earth have been proving it on the Utah salt for 70 years. The gathering in Detroit featured some of the greatest recent Bonneville racers.

At the bottom of the escalator, the Cobo basement is home to Autorama Extreme, where traditionally styled, owner-built hot rods, customs, trucks, and bikes hang out.

Of course, the coveted award was the Don Ridler Memorial Award. The selection process starts by reducing the field of competitors to eight semifinalists called the Pirelli Great 8. From those eight, judges pick the Ridler winner. In 2018, the honor went to Greg and Judy Hrehovcsik’s 1957 Chevy, built by Johnny’s Auto Trim & Rod Shop.

The winner of the 2018 Don Ridler Memorial Award is the 1957 Chevy 150 Hardtop owned by Greg and Judy Hrehovcsik and built by Johnny’s Auto Trim & Rod Shop in Alamosa, Colorado.
“Imagine,” as the Chevy is called, began with a concept illustration by Jason Rushforth. From there, the project went through several iterations spanning more than a decade—eventually ending up at Johnny Martin’s shop.

Doing a radical rebuild on a 1957 Chevy is risky business. Making even mild changes to these iconic cars invites controversy. Johnny’s Auto Trim made hundreds.

The roof was recontoured and the top was chopped 3 inches. The window glass was sunk and laid back for a more aerodynamic profile. The popular 1957 bullets have been retained on the pancaked and sectioned hood—and can function as scoops for small twin blowers or turbos. The body has been channeled 3 inches and wedged and sectioned 1 inch in back and 3 in the front. The 19- and 21-inch one-piece custom wheels were designed and built to resemble stock hubcaps.

Power is provided by a Nelson Racing 515ci twin-turbo Chevy big-block engine, dressed up fancy with custom components. The beauty is also a beast—the engine is capable of more that 1,000 hp on pump gas. Feed it race fuel and the horsepower rating jumps to 1,800 hp. The engine is backed up by a modified Turbo 400 transmission. The Corvette rear is packed with 4.11:1 gears. The rear is suspended with custom fabricated coilovers.

The interior is 1957 Chevy inspired, but with 21st century styling, starting with the handcrafted bucket seats, split by a custom console. A new single insert was grafted into the dash and houses one-off gauges created by Classic Instruments. An Evod steering wheel was created to match the elegance and style of the rest of the cockpit.

Autorama Extreme, in the Cobo Center basement, is the spot for traditionally styled, owner-built (typically) hot rods, customs, trucks, and bikes. This year the basement was as packed as ever—with vehicles as well as with an atmosphere and energy different from the main floor. Activities exclusive to Autorama Extreme are the separate awards ceremony with custom made trophies, live bands, the Vinsetta Garage Miss Autorama pinup girl contest, Gene Winfield’s Chop Shop, and an irreverent attitude that shows itself in the displays. The vehicles are traditional; the displays are far from it. The common element to upstairs and downstairs is the imagination and passion that is poured into the vehicles.