Newsletter
Sign Up today for our FREE Newsletter and get the latest articles and news delivered right to your inbox.
Home » 2018 Arizona Super Show 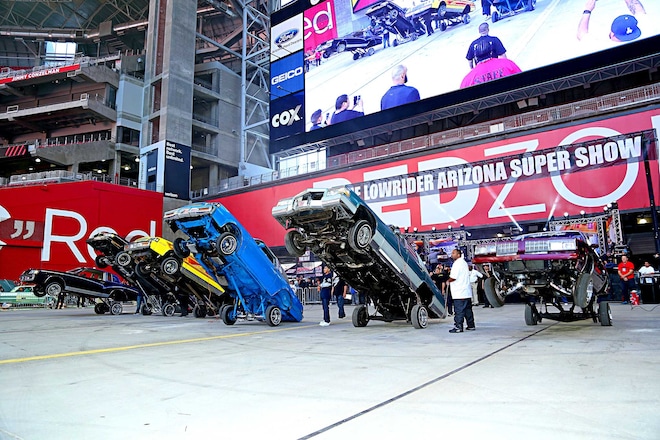 Arizona’s largest lowrider show returned to the University of Phoenix Stadium and it’s safe to say that it’s been blown up—in size that is. This year we saw a venue expansion, which boasted the use of Lot B as well as the Plaza. Inside, the addition of a second level became home for lowrider bicycles and motorcycles, while the main floor remained the primary area for vendors and show vehicles to converge.

As expected, the usual suspects were on hand showcasing their latest offerings and the most popular attractions remained the Hoppo’s booth, Krazy Kutting, as well as Logo’s Two. Being that this is a sanctioned show, many of the cars in attendance were there to qualify for the Las Vegas Super Show. Among the highlights included a 1957 Bel Air from Goodtimes Car Club dubbed “Double Trouble.” The 1957 initially broke out last year but this year it came back with plenty of upgrades. Located next to him was a 1965 Impala called “BLVD Madness.” The 1965 from Thee Artistics flaunted a breathtaking tangerine paintjob, making it a definite crowd favorite and a sight for sore eyes.

The main floor played central hub for some of the most respected car clubs to connect, compete, and converse. Among those in attendance were clubs such as the Imperials, Oldies, South Side, Goodtimes, Elite, Klique, Highclass, Tradicionals, Originals, Uniques, and USO. To no surprise, the Imperials had a whole lineup of cars laid out on 20×20 displays while South Side showed up with their trademark late-’50s model cars that were flawless and sporting only the most rare N.O.S. parts.

On the flipside, the hop contest brought the noise, and as dozens of cars competed to be the top gun, it was just a precursor to the concert that kicked off with Warren G, WC, and Baby Bash, just to name a few. By 8 p.m. the show came to a close, marking yet another successful year of what is not only the largest lowrider show in Arizona but also the best game in town.

We’ll see you all next year!