Newsletter
Sign Up today for our FREE Newsletter and get the latest articles and news delivered right to your inbox.
Home » 2018 Albuquerque Lowrider Super Show 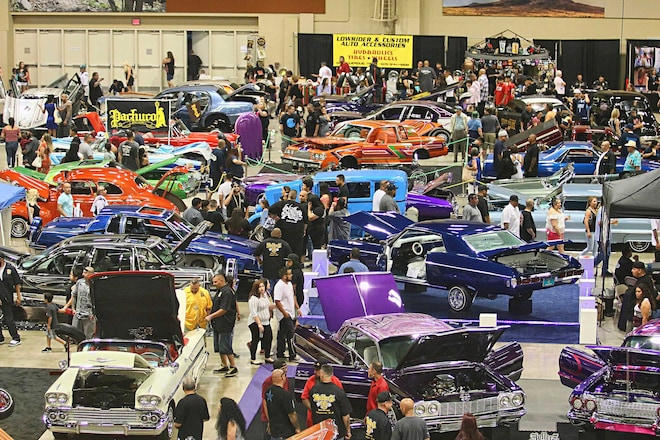 The annual Artemis Productions and Lowrider magazine-sanctioned super show was held at the New Mexico Convention Center in downtown Albuquerque, and like always this show continues to grow every year in every aspect of classic or custom-built car year, makes, models, and judging categories.

Car shows can be nightmares to promote, and it takes long, hard years of planned work to build a successful event that hopefully becomes an annual super event. First off you need to have a building or venue that’s sort of nice and up to date, then you have to have the best of the best cars to represent this place inside. You have to reach out and get the trust of the car builders and car clubs to believe that they will have their rides set up for display with proper judging and a worthy large crowd that will come through the turn styles to support the show. You need vendor booths, music, and food concessions to build the right atmosphere. Besides all the hard work, dedication, and risk that a promoter and a very good staff have to commit to, it also takes some luck as well to be successful. In the end, it’s a huge sacrifice for all because you have to do it for the love of the hobby and sport of lowriding.

Promoting a show is not just a business venture, it’s a straight-out do or die mission. Very few make the grade, and then there are the shows that eventually become super shows. Artemis Productions, Joe Romero, and his loyal staff have achieved this super status because of the above stated. From the outside looking in, New Mexico’s lowrider heritage claims to be the Capital of Lowriding and Mexican food, so if you are from out of the state or the country that’s the first thing you look for—lowriders and their famous restaurants. I have to admit that New Mexicans back it up when it comes to food but you really can’t gauge the lowrider scene unless you’re there for a while to hit all the cruising spots and hangouts. But once you arrive to the Albuquerque Super Show and enter the shows doors you witness hundreds of cars that can compete in quality with anyone and everyone out there!

From classics and convertibles to customs this show puts on a showcase like no other top venue show. There is no wonder when you see the huge banner hung up on top of the shows rafters right in the middle aisle that proclaims ” Showcase Lane” when you see the amazing exhibition and variety of displayed show cars. When it comes to Bombs there was a huge bomb squad of the Dukes, who owned aisles of the shows space as well. The very well missed lowrider legend Julio Ruelas’s famous relic was also brought out onto the display floor and it brought powerful memories of the family and their club’s legendary past and present-day legacy. The Majestics, GoodTimes, and Rollerz Only were in force, as well as Ricardo’s Big Buick and the Oldies Car Club.

There were a lot of car clubs who traveled out to join in on this must exhibit or attend show, like the Techniques and various chapters, including Joey’s black beauty Lincoln, capping off their very nice rides and display. Bobby’s “Double Trouble” rad rag 1957 Chevy from GoodTimes was the spotlight of the show, as usual, but as mentioned before New Mexico does back up their own caliber of rides, too. New Mexico Car Club continues to grow in quantity as well as quality, and let’s not forget that the Imperials chapter in New Mexico also brings along a custom enchantment with their reputation too.

Krazy Kutting had a huge vendor booth of custom-fabricated accessories as well as a personal-built seductive Candy Red 1964 that will be showcased on Lowrider’s cover very soon. OG Abel had his artistic creations and designer T-shirts on display and right next door to him was Bugs Auto Works and some of his artifacts and visuals to give everyone in attendance an idea for some custom paint and ‘striping schemes that one day can be realized on their own project builds. There was plenty of music, beer, and an outdoor hopping contest that took place in 95-degree weather with a cool breeze and a little rain, but that didn’t cool down those batteries, as all you heard was juice from the switches turning those pump motors.

All in all, there was a lot of hard work invested into this great show that took a whole year of blood, sweat, tears, and love toward the lowriding culture of New Mexico and it’s only sad that it all takes place in one weekend, but the memories it leaves linger on as we just can’t wait for next year’s event to come up.

Special thanks to Joe Romero, his family and friends, his committed-to-the-end staff, and the wonderful, beautiful hard-core of lowrider fans who represent Albuquerque, New Mexico. Last but not least, if you have a show car or belong to a club, this is a must-attend experience, unlike any other. Plan to get out there and be part of the land of enchantment because you will never stop going back. God bless New Mex!