Newsletter
Sign Up today for our FREE Newsletter and get the latest articles and news delivered right to your inbox.
Home » 2017 Tejano Super Show 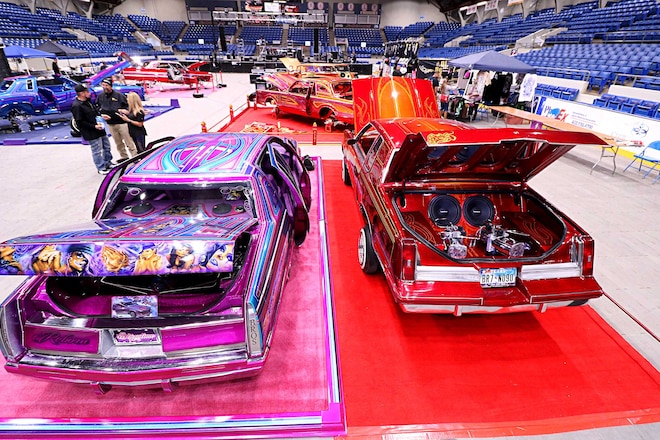 With history comes responsibility, and there was not a shadow of doubt that Nick Hernandez (a 2006 LRM Hall of Famer) would deliver yet another colossal lowriding extravaganza to celebrate the much-anticipated 46th annual Tejano Super Show. The Lowrider-sanctioned two-day affair in Odessa, Texas, dispensed exceptional rides, remarkable music lineups, plentiful vendors, and the opportunity for fans and car owners to enjoy the weekend bonding with fellow lowriders. By far the most distinguished happening in the Lone Star State, this event came to life much in thanks to sponsors like Domingo Garcia Law Firm, Wireless 4 U, Bajito Body Shop, Let It Shine Mobile Wash, and Square Heads Media.

The show has grown by leaps and bounds and the Ector County Coliseum continues to be their venue of choice. Hundreds of illustrious rides were scattered throughout the six massive exhibits halls and outdoor designated show grounds. The main hall of the coliseum featured some of the best of the best lowriding masterpieces.

Father and son custom building duo Victor and Stacy Stewart, from San Antonio, Texas, proudly showcased their chopped 1939 Chevrolet Master DeLuxe. Robert Casas’ 1964 Chevrolet Impala trekked in from San Diego, California. This candy red and silver traditional had gleaming engraved parts inside and out, not to mention from top to bottom, all courtesy of Krazy Kutting.

Sitting directly across from the 1964 was an equally impeccable Chevy belonging to Sam Torres from Dallas. This Torres Empire-owned immaculate 1959 Chevrolet Impala wagon is just one of the exemplary rides from Sam’s stable.

Austin Rubio from Onda Car Club presented upgrades to his intricate LRM sweepstakes-winning trike that caught the judges’ interest and rightfully deserved to be featured on the central floor.

Artist selection for the show certainly didn’t disappoint and the crowd on both days could hardly contain their excitement. The Saturday evening party was in full effect with Tejano tracks performed by the infamous A.B. Quintanilla and Elektro Kumbia, Pete Astudillo & Tekno Mex, and Stevie D. Sunday’s music ticket featured SPM’s son, JD Coy, Carolyn Rodriguez, Tiny B, and Houston’s own Z-RO. West Texas bad boy, DJ Lil Mario, who has been dubbed as an official KiddNation DJ spun the 1s and 2s in between the phenomenal performances. While the music aficionados relished in the music concert, hydraulic fanatics took pleasure in the highflying back bumper action in the hop pit, sponsored by Krazy Kutting and Hi-Low Customs Hydraulics.

Throughout the exhibit halls, rows and rows of candy-painted and chrome-plated rides hailing from Texas, New Mexico, Arizona, Colorado, Kansas, and California either sat planted low to the ground or perched on stands displaying illustrious detailed undercarriages.

The high chief, Kita Lealao’s big-body Cadillac “Tribal King,” graciously made it from the West Coast and led an astounding collection of USO rides. High Class, City Styles, Impalas, and Brown Impressions revealed numerous works of art and exemplified why they are clubs to respect and admire not only in quantity but also with quality. Additional reputable clubs in attendance not to be missed were Imperials, Majestics, Our Style, Rollerz Only, 1st Impressions, West Texas Finest, Illegal Toys, Originals, Latin Edge, Mystic Styles, Significant Others, Extazy, and Angelitos.

Whether you were an individual rider or a band of club brothers, the love for lowriding set the tone for the show and the vibe was positive unity to appreciate everyone’s participation and presence. Nick Hernandez would like to extend a gracious thank you as he does every year and invite all to return for another LRM-sanctioned experience in West Texas.