Newsletter
Sign Up today for our FREE Newsletter and get the latest articles and news delivered right to your inbox.
Home » 2017 Las Vegas Super Show 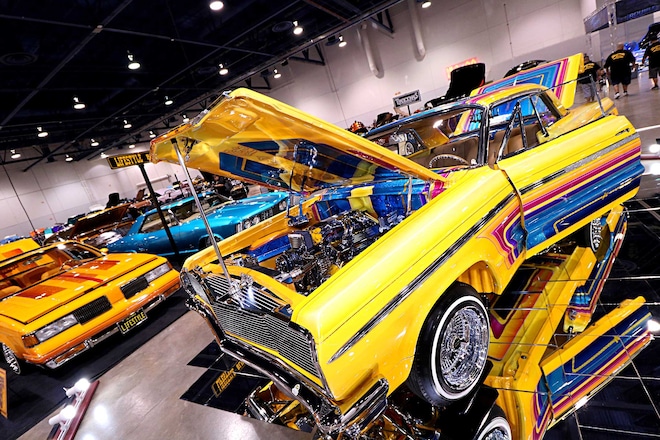 The Lowrider Super Show is just that: a super show. It’s a collective of the most highly coveted lowriders in the game, and a competition by which builders from all across the world come together to celebrate, compete, and enjoy the festivities. The Super Show has become the granddaddy of all lowrider shows so by 10 a.m. it came as no surprise that the line for entry had already extended well into the parking lot.

As patrons began trickling into the show, they scoured each hall with excitement, while crowds slowly began forming at some of our staple exhibitors. Krazy Kutting had patrons devouring their custom-engraved parts, Hoppo’s came with their hydraulic game on point, while many were in attendance to pick up their custom letterman jackets from Logos Two. In addition, David Gonzalez was at the DGA booth with unique apparel while the Lowrider Clothing booth had two booths selling their annual Super Show shirts. This year, Quaker State, our Roll Models sponsor, came out for the first time and brought a bunch of goodies to give away. Spectators were lined up all day at the Quaker State booth in hopes of winning a prize, such as a gas card or a Roll Models shirt. Michael Grey (our Episode 3 Roll Models feature) had his all-original 1957 Bel Air on display in their booth.

The battle to win this year’s Lowrider of the Year (otherwise referred to as LOTY) title was one of the most closely contested battles in a long time. The battle was between two-time winner “Final Score,” owned by Chris Roark, who is no stranger to the scene and the builder of many title-winning cars. His last build was called “Perfect Score” and won the highly coveted award three consecutive times. He had hoped to do the same with “Final Score” but first had to get past Texas native Bobby Garza. Bobby has been competing for the LOTY title with his Cutlass and even defeated Final Score once but at the last sanctioned show Bobby broke out with a new 1957 Bel Air build that qualified for the title running. The weeks prior to the show we already knew that the 1957 was going to get a facelift before heading to the Vegas show but Bobby did more than that, as he gathered a team who practically rebuilt the whole car. The car received a twin-turbo motor, a Leal Bros. paintjob, complete interior, and multiple other upgrades in less than two weeks. At the end, Chris narrowly took the title to win his third straight title. While many say that Bobby would have won the title if he had another week, it’s something that we’ll leave to conjecture, but knowing that he now has roughly another year till the next show he’s got plenty of time to come back with more tricks and more passion for yet another friendly rivalry that will have our culture on the edge of our seats.

The week leading up to the Super Show was filled with intensity and plenty of predictions. As social media began making their predictions as to who would win LOTY, a large majority stood by Eric Wisterman’s “Breaking Bad ’62.” Unfortunately, he didn’t place in the top three but he still took home the Excellence Award, along with the Best Hydraulics award. For those who don’t know, the Excellence Award is given to the car that best personifies what a lowrider should be, and in addition he also took the unofficial Fan Favorite award.

With a total of 79 entries, USO showed up strong to celebrate their 25th anniversary. With a complete row inside, starting off with Kita’s Cadillac, you could also find a littering of their vehicles on the outside. Included in their lineup were a few cars that made their way in from Canada and at around 3 p.m. is when I couldn’t help but notice just how deep they rolled. With all white shirts walking in a mob, the swarm of USOs surrounded Kita like he was the Pope and they were his personal bodyguards. In short, they let the world know they were present and as they celebrate their 25th anniversary we’d like to congratulate them and we can’t wait to see how the club expands.

As the afternoon heat began to turn up, it was around 1 p.m. when the hop exhibition kicked off. With 11 exhibition hoppers pounding the pavement, the crowd was packed with adrenaline and as each car reached for glory, it was all a precursor to the concert that started at 3. By 5 p.m. the day had come to end and in support and in memoriam of all those who suffered in the Vegas massacre, which took place just a week prior, Joe Ray said a prayer and took a moment of silence, giving gratitude to all those who showed up in attendance and wishing everyone a safe trip back home.

In all, the show left everyone exhausted, but as it came to a close, it was proof once again that our lifestyle is one that is continually upping the ante and taking cars to the next level of customization. Considered the Super Bowl of all lowrider shows, we’d have to agree, but in the same breath, it’s all become possible because of the passion, love, and camaraderie that serves as the backbone to the lowrider culture.