Newsletter
Sign Up today for our FREE Newsletter and get the latest articles and news delivered right to your inbox.
Home » 2017 Kansas City World of Wheels 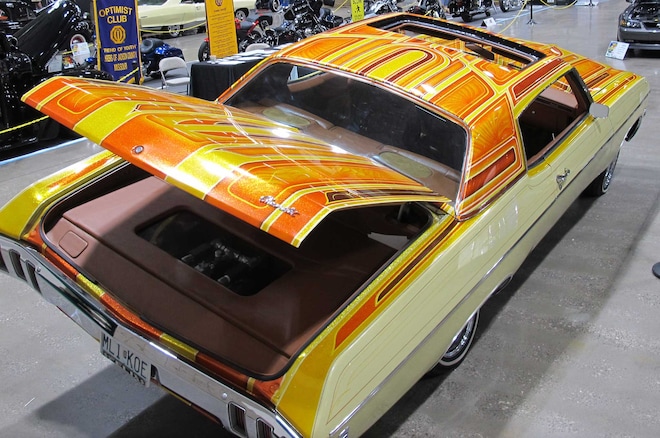 Since 1961, the Kansas City, Missouri, Convention Center (later renamed Bartle Hall) has been one of the many homes to the Championship Auto Series circuit of car shows: The Autorama, World of Wheels, and Cavalcade of Customs.

This trio of branded shows features some of the finest, most-admired custom cars in the world. With multiple dates in several cities across the nation, enthusiasts flock from far and wide to compete for the highly coveted and prestigious Ridler Award, which is appointed to the car deemed best in show. Aside from getting lost in a sea of rides, each event hosts a variety of activities, such as autograph sessions from celebrities, chop shop demonstrations, and a barrage of vendors and other activities that are sure to satisfy attendees of all ages.

A major part of the show also happens to be “The Lowrider Nation” showcase. With a variety of styles and different platforms on display, there was much to see at this O’Reilly Auto Parts-sponsored event. With future stops in Dallas, Chicago, and Omaha as well, these three-day car shows bring out some of the baddest custom vehicles—especially when it comes to the special exhibit of lowriders. There were aisles of traditional and custom cars representing the Midwest culture, and representing hard were clubs like Rollerz Only, Viejitos, Majestics, SouthSide, GoodTimes, Real Riders, Royals, and the Midwest Outlaws from Minnesota.

I could go on and on about this event, but pictures can do the talking so be sure to check out the special coverage we have in this issue as well as online. While the pictures help get a feel for the show, there was no way to really describe it without being there. The weather was in the 50s (which was like summer out there) and the local barbecues were the best ever. So don’t miss out on their next event. Visit them at www.autorama.com for their complete tour schedule.