Newsletter
Sign Up today for our FREE Newsletter and get the latest articles and news delivered right to your inbox.
Home » 2017 Arizona Supershow 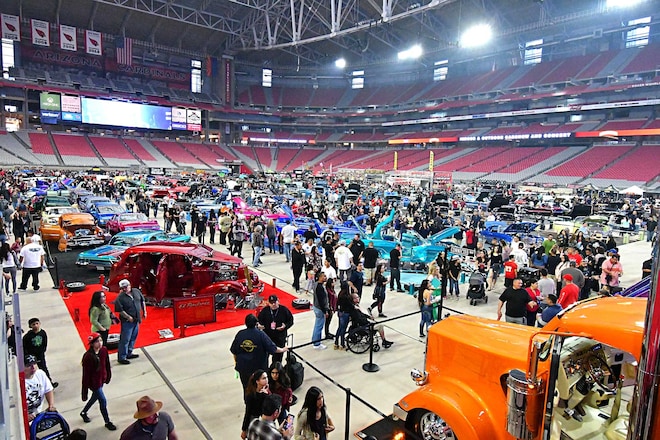 The Lowrider Magazine Car Show & Concert Tour kicked off 2017 at the spectacular Arizona Cardinal Stadium. Year after year the show continues to evolve into a finely tuned production and it’s unimaginable to think that it could get any better&mdash;but it does, and it will.

First off, before we get going here, many thanks has to go out to show promoter Tony Herrera and crew. The venue has become a tour stop favorite and once again the show brought together an ensemble of both quantity and quality when it comes to custom rides. From classics to customs, bombs to trucks, there was a plethora of eye candy on hand, and regardless of whether you showcased inside or out, the level of customization was deep and it set the pace for an aggressive but friendly competition.

A live concert had everyone in the mood and the exclusive hopping contest triggered more than just switch fingers. As the 520s pounded the pavement there was so much going on that they even had a live streaming show being broadcasted on the jumbotron. The show, which began in the afternoon, played home to tens of thousands of fans; making your way through the vendor row was simply intense.

Some of this year’s vendor aisles featured Krazy Kutting who brought out their metal artistry and on hand were some engraved billet pieces, chrome automotive accessories, and of course, no vendor row at a Lowrider show would be complete without the presence of Hoppos Hydraulics and air ride. The two companies showcased their latest offerings for altitude adjustment and straight down their path was Logos Two with a booth setup that looked more like a shopping mall full of custom-stitched clothing.

Perusing the show, one could find just about every type of year, make, and model of lowrider style, and when it came to paint, the show was packed with unique colors of candy, flake, or pearl paintjob finishes. Aside from a state-of-the-art venue, the show cars were of equal caliber and the attention to detail trickled all the way down to the wild setups and displays. The judging crew worked tirelessly, and it’s safe to say that they had their work cut out for them because there just simply weren’t enough categories and trophies to go around because everyone exhibited for display was second to none.

In all there were roughly 650 cars on display and it took mad sacrifice, organization, and plenty of sleepless nights to get this done correctly. That said, Tony Herrera gives credit not only to his complete show staff, but also to his brother Kenny for putting together the great entertainment lineup, and Alex Rodriguez who put together the Hop and was instrumental in promoting the show. All said and done, just check out our coverage and see for yourself why this enormous event is daring to go above and beyond all expectations. We can’t wait to see what they’ve got in store for next year’s show.