Newsletter
Sign Up today for our FREE Newsletter and get the latest articles and news delivered right to your inbox.
Home » 2016 Las Vegas Cruise Night 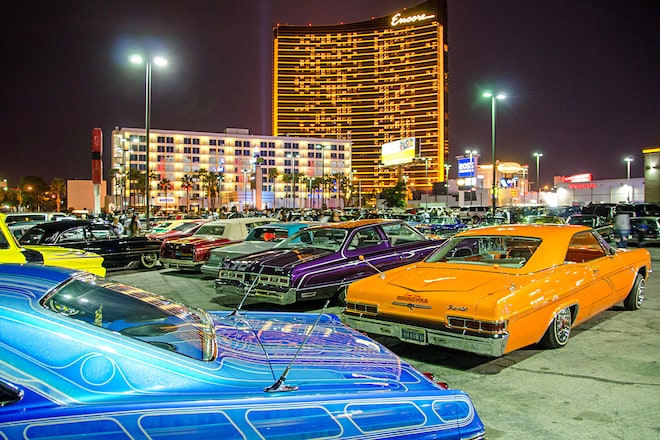 Long before it became known as the “Las Vegas Strip,” the 4-mile stretch of land used to be barren and desolate. It’s even more shocking to think that the infamous Vegas Strip once played second fiddle to Fremont Strip—which many consider to be the genesis of everything that now defines the City of Sin.

Fast-forward to present day and both quadrants are battling for consumer dollars. The gentrification of the Fremont Strip has not only created a resurgence and new vitality, but also created a new and improved backdrop for those wanting to cruise the area.

As lowriding culture experiences the same rebirth and resurgence, Vegas is no exception. These days, both downtown and the boulevard have become the frequent stomping grounds to cruise and on this cool Saturday evening we came across over 250 cars, trucks, and bikes that were out in full force.

The usual suspects were out on the block so it came as no surprise that we ran across the fellas from the Majestics, Goodtimes, Street Players, and Lowrider Style. In addition, Tiempo Car Club and the Cardenas family hit the streets with their classic bombs, and as expected, they were snapping necks and giving tourists a glimpse into lowrider culture.

The lowriding shindig went off without a hitch, and the family affair became a vehicular experience that no one will soon forget. Even local law enforcement were in attendance, snapping tons of pictures as they too admired the hard work and heritage that each of these vehicles displayed. So as Las Vegas reignites its love affair with lowriding, it’s safe to say that you’ll be seeing more coverage of future get-togethers and events.