Newsletter
Sign Up today for our FREE Newsletter and get the latest articles and news delivered right to your inbox.
Home » 2016 Kansas City Autorama 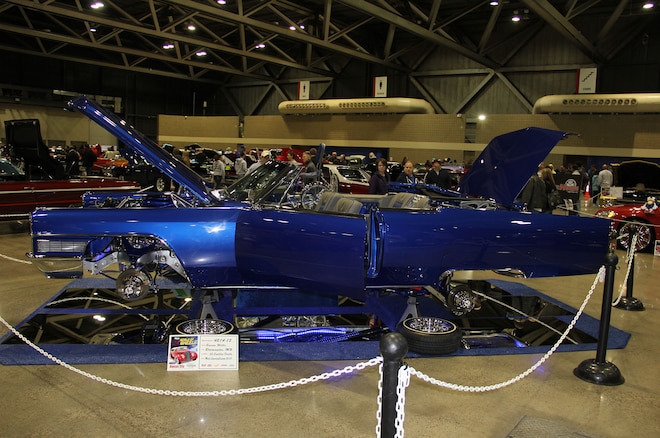 The Championship Auto Shows produce the largest car show series in the automotive business. Better known under the monikers of Autorama or World of Wheels, there are close to 20 events held annually across the United States and Canada. Though hot rods and the competition for the Ridler Award are always at the heart of each show, in recent years the composition has expanded to include more custom lowriders on their tour. Houston, Salt Lake City, and even Omaha are on this year’s list, as well as this issue’s featured coverage of Kansas City’s Autorama where the spacious venue, Bartle Hall recently hosted hundreds of custom cars, classics, hot rods, trucks, motorcycles, and of course the Lowrider Nation all under one roof. In addition there were many feature exhibits and several celebrity guests, like Danny “The Count” Koker from the Counting Cars TV Show, who was in concert Saturday night with his band the Counts 77. Also getting rock star type of attention was an immaculate white 1957 Cadillac Eldorado Seville, chopped top Mercs, and a 1965 convertible De Ville on jackstands, putting Minnesota on the lowrider GPS.

Kansas City’s very own legendary car builder Blas Ledezma broke out with a satin and slammed 1949 Buick Roadmaster, and as always, the Viejitos Kansas City chapter brought out their mean-looking bomb classics. There were many different car club show cars exhibited and represented well at this show, and though everyone looked like a winner, the Editor’s Choice award went out to a 1964 Impala rag from SouthSide.

The unity amongst the Lowrider community has been brought upon by the sincere guidance and blessings offered by none other than the man known as the “Preacher.” Though he once again displayed his two beautiful rides in support of the show it was with a heavy heart, because his wife was also gravely ill and after the show she died. God bless her and may she rest in peace; we’re sure many prayers went out from the good friends gathered around her.

Besides the car shows attendance also being huge for this three-day weekend event, the crowd was very much attracted to the LOWRIDER exhibit area where the LOWRIDER Rig and a couple of L.A. cars were also show cased. Kansas City has a very humble and passionate Lowrider community that really cleanses the soul. If I thought that the love I have for lowriders could not be matched, I was wrong. Kansas City doesn’t take lowriding for granted, despite the weather, economy, and lack of hydraulic shops, body and paint shops, and even interior shops. Their belief and passion for our culture is remarkable. It doesn’t come easy like out here on the West Coast, they have to try harder to prove their passion. That’s why their state is called the Show-Me state, because as I witnessed, they do.