Newsletter
Sign Up today for our FREE Newsletter and get the latest articles and news delivered right to your inbox.
Home » 2015 Pasadena Tejas Super Custom Car Show & Concert 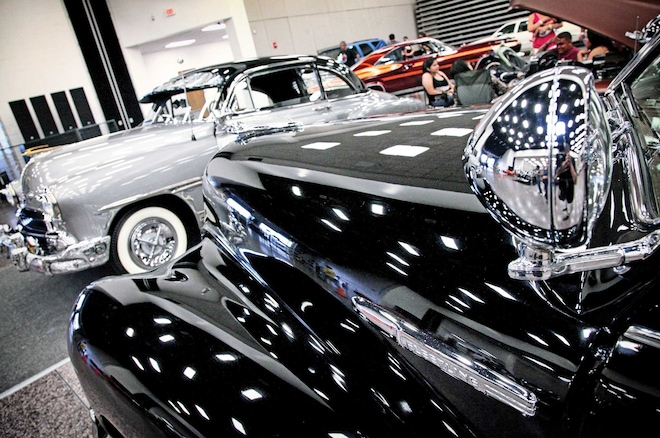 Legendary clubs and faithful members who commit themselves to the lowriding movement have been key ingredients in keeping the rolling tradition alive.

Conrad Ramirez from Oldies Car Club is one of those dedicated souls who lives and breathes the lifestyle. He is the owner of Conrad Kustomz in Pasadena, Texas, where the one-stop shop has produced countless custom rides with metal fabrication work, flawless paint schemes, audio installs, new stitchwork, and the list of customization goes on and on. In fact, his own LOWRIDER magazine feature, ’54 Chevy Bel Air “Sweet Anabel,” is a prime example of his successful shop creations. His love for lowriding was instilled at an early age and many can relate to his childhood surroundings, especially when it’s your father, grandfather, and cousins hitting the Los Angeles boulevards or local car shows in their beloved Bow Tie classics.

Ramirez is a Texas native and his dedication to the sole Texas chapter of Oldies Car Club has been a priority for over 10 years. There’s high expectations flying this club plaque and Ramirez sparked the Houston, Texas, lowriding community interest with his sixth annual Pasadena Tejas Super Custom Car Show and Concert.

Conrad Kustomz LLC, Pachucos R Us, and El Chuco Ramirez Productions presented a showdown not to be missed in East Texas. The Sunday kickoff consisted of a range of custom vehicles descending into the main exhibit arena and outdoor spots to fill the grounds to capacity. If it was variety the attendees wanted, they certainly got it with bombs, motorcycles, SUVs, bicycles, G-bodies, and more.

Ramirez would like to thank his club members, his family, and friends, and everyone who contributed to the attainment of putting on yet another great show in Pasadena, Texas.