Newsletter
Sign Up today for our FREE Newsletter and get the latest articles and news delivered right to your inbox.
Home » The 2015 Lowrider Arizona Super Show 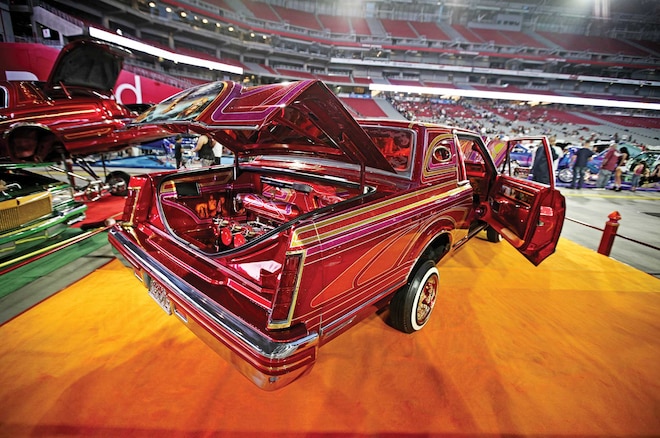 A few months after this year’s Super Bowl XLIX (49) was held in Glendale, Arizona, the University of Phoenix Stadium became the largest indoor/outdoor LOWRIDER Magazine-sanctioned Super Show anywhere. Once again this state-of-the-art stadium rolled out its enormous football field and then hit the switch to open up the world’s biggest retractable moonroof to welcome over 600 custom and classic one-off lowrider creations. Tens of thousands of lowrider fanatics jammed the spectacular arena and were entertained by a huge indoor stage that featured the live performances from The Game, Midnight Star, Baeza, Candy Man, and Baby Bash just to name a few.

There were two huge jumbotron HD video screens as well that captured the indoor hopping contest that displayed the top contenders with charged and sizzling batteries demonstrating their hydraulic equipment’s capabilities right in front of the main stage. The Arizona Super Show saw multiple cars debuting; most notably Eric Wisterman’s 1962 Impala from Northern California named “Breaking Bad ’62”. This ’62 was the talk of the show with its four Weber 48 IDA carburetors and its television show murals by Alberto Herrera.

After retiring his three-time Bomb of the Year “Inferno,” Gene Baer of Cashing, Arizona, debuted a one-of-a-kind 1958 El Camino. What makes this car so special is that Chevrolet didn’t start producing El Caminos until 1959, so Gene took it upon himself to create one out of a 1958 wagon. Self Made Car Club out of Los Angeles broke out with a 1959 convertible Impala named “The Mothership.” This black with red interior Impala looked flawless at the show.

The large venue’s escalators were running full capacity as usual, bringing hundreds of spectators down inside or up to the outside parts of the Super Show in seconds flat. The outdoor part of the venue was very much entertaining as was the inside, with hundreds of show cars lined up for miles on display, along with vendor booths full of happy customers gathered around. There was too much food and a huge garden with a surplus of cold beer to quench the thirsty crowd.

The Arizona Cardinals cheerleaders, and their mascot “Big Red” were also present at the huge history-making car show. If you haven’t ever shown your show car, enter it here at next year’s event. You’ll experience the amazing stadium event feeling that only promoter Tony Herrera and the Arizona Super Show staff members can bring once again.