Newsletter
Sign Up today for our FREE Newsletter and get the latest articles and news delivered right to your inbox.
Home » 2015 Carnales Unidos Bakersfield Super Show 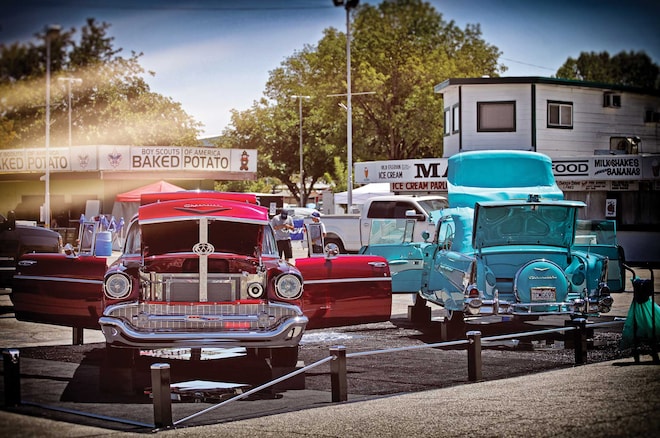 Forty years ago back in April 1975, a crowd of lowriders from the Bakersfield area were gathered at the local car wash. When they all got together there they came up with the idea of forming a car club that would benefit the different areas and neighborhoods within the community. From that instant on, these united brothers would choose a name that would best represent what they would all stand for, and they became the Carnales Unidos.

Their mission began by staging benefit events to support their local communities, such as car washes, parades, March of Dimes charity dances, and Toys for Tots benefit car shows. Four decades have gone by and the traditions remain the same as generations and chapters of the Carnales Unidos continue their quest to support their cities and become great role models through the lowrider movement.

To help celebrate their legacy and 40th anniversary this year, LOWRIDER Magazine partnered up with the Carnales Unidos and sanctioned their annual Bakersfield Super Show to help out as they once again strive to benefit their community by funding the local Kern County Cancer Foundation this past August. The festive atmosphere began on Saturday as over 500 lowriders swarmed the Fairgrounds. There were a lot of quality full custom rides on display as this was the last show on the circuit to qualify for the top Lowrider honor awards at the Vegas Super Show.

As Sunday’s show began, there was plenty of music, food, booths, and the always-entertaining hopping contest. Hubbard’s Impala “NOS” Parts were on hand as well as the fabrication factory known as Krazy Kutting. The Groupe and Klique Car Clubs also came out in full force, taking over all the space in both indoor halls. Though it was a hot one out there, the crowd came out in full support of this grand annual event, just like in the past great shows that the Carnales have hosted.

Lowrider Hall of Famer Harvey Reyes, his club, and family would like to say that, as they continue to commit to those in need, that they couldn’t do this without the continued help and support from all the various car clubs and individuals who have been there throughout the years. As the trophy presentation ended that day and everyone began to load up their rides on trailers for their journey back home, you could see the pride that everyone had for the support and commitment toward traditions and charitable events. It left even a sunburnt crowd feeling proud for their genuine efforts to benefit the event for a cure.