Newsletter
Sign Up today for our FREE Newsletter and get the latest articles and news delivered right to your inbox.
Home » 2015 Albuquerque Car Show and Concert 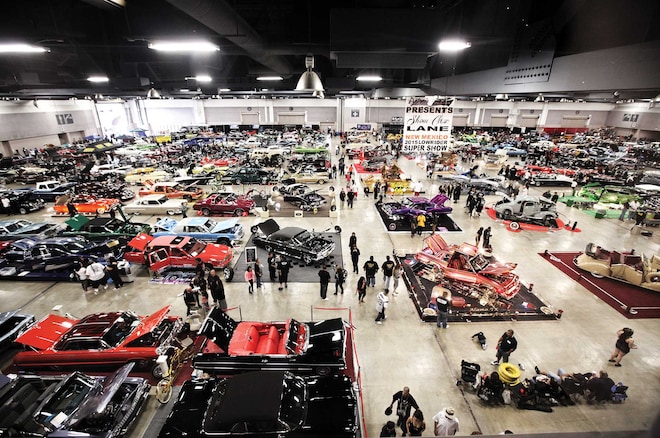 New Mexico is known for its Native American/Hispanic culture, hot air balloons, adobe architecture, and of course the hit TV series Breaking Bad. If you were a fan of the show like I was, then you suffered withdrawals when the show ended in September of 2013. We were able to get a quick fix when AMC created Better Call Saul, a prequel spinoff of the show. A few of the episodes from Better Call Saul feature a parking lot tollbooth at a courthouse. In actuality, the tollbooth is located at the Albuquerque Convention Center, where the 2015 Albuquerque Car Show and Concert took place. Artemis Promotions brought this LOWRIDER Magazine tour stop to the Convention Center.

The indoor venue limited the amount of car entries, which in return made this a more exclusive show. There were also plenty of vendors at the show such as Harley-Davidson and Lowrider Car Care. Harley-Davidson had multiple booths throughout the show, including their Jumpstart Rider Experience, which gave everyone considering a buying motorcycle a chance to mount a Harley, fire it up, and experience the feel, while in a safe setting and under the watchful eye of trained personnel. Speaking of Harleys, La Vida Customs showed up with multiple full show bikes in every color you can think of.

Plenty of local car clubs showed up with quality cars such as Oldies New Mexico that had a 1937 Chevy Businessman Coupe on full display and a late-’30s Packard. New Mexico CC showed up with multiple Tri-Five and Impala convertibles and we are sure that the state is proud to have them representing its name.

Prestigious Car Club is no stranger to the pages of LOWRIDER Magazine as they have produced multiple cover and centerfold cars. This year Fred Rael broke out with a creme 1964 Impala, while fellow club member Ken Jacquez showed off his new 1959 Impala. Imperials New Mexico showed that they are one of the best clubs in that state with their multiple 1958 Impala convertibles and the all-original 1959 Impala convertible named Tiene Todo. Plenty of solo riders also came out to represent, such as Juan Bustos who threw everyone off by slapping chrome wire wheels with whitewalls on one side and big wheels with low-profile tires on the other.

Many of California’s finest rides made the 800-mile trip to take part in New Mexico’s largest lowrider show. Donald Tovar came over with his 1948 Chevy Fleetmaster. With a lot of bomb lovers in the state, his ’48 was definitely a crowd pleaser. Other Cali bombs included Lowrider Hall of Famer Ricardo Alavardo’s 1936 Buick Roadmaster. Uniques Car Club in California had multiple cars on full display, as did Nokturnal.

California wasn’t the only state to come out and represent. Bobby Garza brought out his 1987 Cutlass, which is the 2014 Lowrider of the Year. Other Goodtimes chapters that showed up were Utah with a full show 1961 Impala convertible. Washington State also showed up with a full radical 1939 Chevy that qualified for sweepstakes at this year’s Las Vegas Super Show.

We’d like to thank everyone from New Mexico and everyone that made the trip from out of state to make this show a success. Artemis Promotions would also like to thank all their families and great staff. Special thanks to Straight Street Automotive, M&F Auto, World Wide Automotive , Classic Cars of New Mexico, and Munoz Customs. Artemis Promotions and LOWRIDER Magazine will do this all over again August 6, 2016.