Newsletter
Sign Up today for our FREE Newsletter and get the latest articles and news delivered right to your inbox.
Home » Evolution Tour 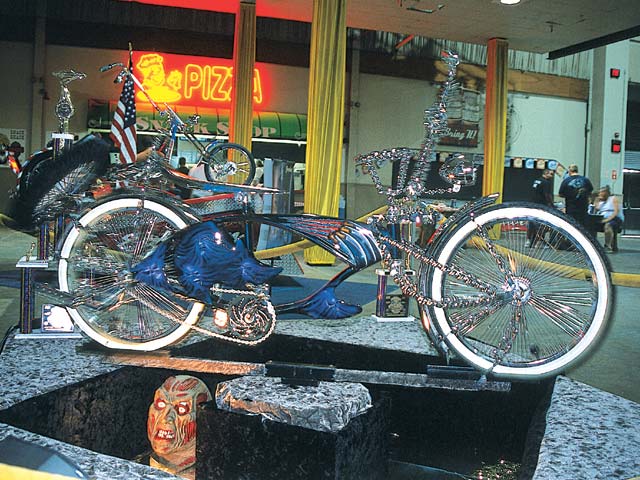 By the time that you peel these magazine pages apart, the 2004 Lowrider Magazine Evolution Tour will be well on its way through another year of 15 annual shows across the country. Lowrider Events likes to throw giant house parties and when a house party is goin’ off in your neighborhood, you gotta be there, right?

Remember back when you were a kid and wanted a cool aquarium in your room? What did you do? You got someone else to foot the bill… namely your parents, only they weren’t selling automotive industry products. It’s much the same in the professional world and writing big checks for big shows are monster-players like Quaker State, Nitto Tires, U.S. Army, Exide Orbital Batteries, CCE Hydraulics, Player Wire Wheels and Limited Alloy Wheels. These companies and hundred others not named here support lowrider bikes (whether you know it or not), the culture, the lifestyle and the wicked feel of chrome and paint.

Destination one this year was once again Miami, Florida. We landed in Miami like a hurricane and found six dudes on a winners list from First through Third. Three for bikes and three for trikes, expect that for the rest of the Tour. Mike Linville’s “Twisted Toy” two-wheeler from Finest Kreations topped the field in Florida and earned a feature elsewhere in this issue. Danny Morales and Jesse Hopkins rounded out the top three spots in the Bike class, while Andrew Arce (also of Finest Kreations) pedaled his way to top of the Trike class, with Armando Escobedo and Alex Alfonso finshing Second and Third respectively.

What do think of when you hear the words Phoenix, Arizona? Most humans on the continent think of baking, searing heat and no water for miles around. You could say the same for the next six young men, only the heat that they bring is very cool. Raising trophies in the air were Sebastian Paz from Nemesis Bikes, Hector Huazano leading the Legions and Adrian De La Garza brought his game up from Finest Kreations. The three-wheeling contestants in the Trike class list as Gene and Cody Bare, winners of the 2003 Lowrider Tricycle of the Year. Riding away with Second Place was Xavier Rojas and Allen Bain had to be satisfied one way or another with Third Place.

Qualcomm Stadium in San Diego, California, is where the first-round-draft-pick NFL Chargers play and this past March the facility got its own taste of lowrider love. The house saw more maniacs like Hector Huazano creeping up for the top spot, while Albert DeAlba from the Elite group settled for Second and Cesar Sandoval… well, Cesar will climb higher with time. He scored Third this time. When you’re in the mood with your chick and a friend wants to hang out, that’s not cool, but when it comes to tricycles, you can toss a three-wheel circle and the world loves you. Making room for trophies were Xavier Rojas in First, Nazareth Gomez in Second and Christopher Hernandez on the dean’s list for Third.

What can we say about Fontana, California? Well, if you’re an Internet threader, you’d know that the Fontana Lowrider show was the bomb and making the most noise was the amount of bikes flowin’ into the world class racetrack turned lowrider mega-show. Some bikes stood still and gleamed with awesome inspiration, while others were on the slow turntable spin so dreamers can be lazy and see all sides without taking the extra steps to each corner. Here are some familiar names and you’ll know their faces soon enough. Hector Huazano went on the attack for First Place and Albert DeAlba, Jr. landed in Second while Christian Garcia carried his registration card to get his Third Place trophy. The Trike competition was equally intense, with Xavier Rojas edging out Francisco Corona by a slim points margin. Nazarath Gomez took Third.

We’re getting good reviews this year as the Evo Tour works its way though America’s hottest lowrider cities. And as of this writing, our Indianapolis, Indiana, show was another sold-out event. Can we get a “Yeah, baby!”? The next issue of LRB will be the bombastic issue to covet and tack up on your walls at home. So far, the first five shows of the Tour are proving to be tremendous successes and in our next issue you can read about the next nine shows including the all-out Las Vegas Super Show when another Lowrider Bike and Trike of the Year will be titled. We’re out for now.