Newsletter
Sign Up today for our FREE Newsletter and get the latest articles and news delivered right to your inbox.
Home » 2015 Mooneyes Xmas Party Show & Drag 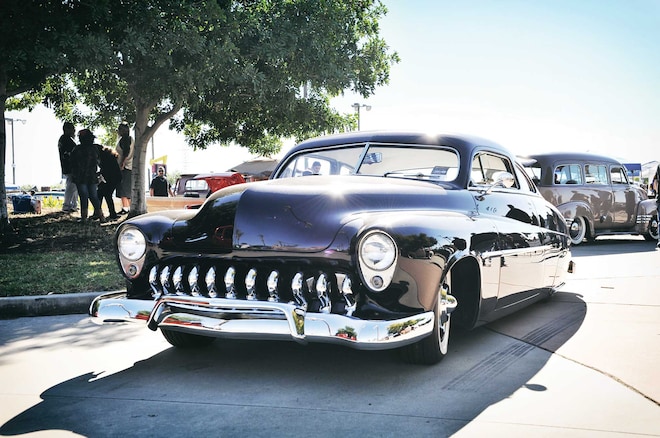 For those willing to brave the cold (by California standards) and start loading their car in at 4 a.m., the annual Mooneyes Xmas Party was another packed event and did not disappoint. Rumors have persisted for several years now that the event’s usual location, the Irwindale Speedway, will eventually come to an end, as the property has been scheduled for demolition and redevelopment as an outlet mall. A representative for Mooneyes could not confirm if 2015 would in fact be the last year at this location, and said they were hoping they could return in 2016. Only time will tell if this was the final year at the location.

The event is not only a favorite of hot rodders and lowriders alike for its abundance of vendors and huge assortment of cars, but live music, a pinup contest, and vintage drag racing also make it unlike any other event. The drags got off to a shaky start with a wreck happening during only the second race of the day. Thankfully no one was hurt. Things continued without a hitch and the crowd enjoyed everything on hand.

You’d be hard pressed not to find at least one ride you’d want to take home with you, which included traditional lowriders, bombs, motorcycles, gassers, deuce coupes, muscle cars, lead sleds, and even things as unusual as one of the actual ’58 Plymouths used in the 1983 film Christine. Hopefully this amazing landmark will survive a bit longer since seeing dragstrips get replaced by outlet malls sounds about as fun as a tax audit.