Newsletter
Sign Up today for our FREE Newsletter and get the latest articles and news delivered right to your inbox.
Home » Cheech Marin’s Art Collection 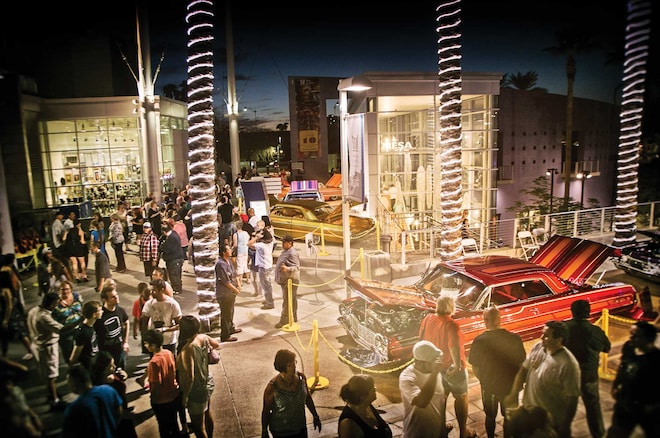 The Mesa, Arizona, Art Gallery Center celebrated its 10th anniversary recently with over 15,000 of its closest friends attending a Latin family friendly festival kickoff September 10-11. The celebration started with an up-close and personal introduction and discussion with actor, comedian, director, writer, and art advocate, Cheech Marin, better known by many as half of the iconic comedy duo Cheech and Chong. His on-hand collection, Take Ten:The Past Decade of Collecting, of his renowned private collection of the entertainer and arts advocate. Cheechhas amassed one of the world’s largest and most comprehensive collections of Chicano art and this passion hasbeen part of his life since the ’60s. We were privileged in sitting with the Los Angeles-born Cheech Marin for an exclusive interview.

We asked him how he first knew he loved art.

Cheech: For me it started when I was about 11 or 12 years old. My cousins and I would study together to learn about different stuff. We would assign everyone a certain topic to learn about, and then come back to the group and report on it. Some were given history, literature, and I was given art. So I visited the library close to home in South Central California almost daily and studied books on art, reading and looking at all the pictures so I could give my report on this subject in learning about artists and their works, like Picasso, Rembrandt, and all the classical paintings. I later started visiting libraries in different cities and though I also had learned about modern art, I had a gap on contemporary art. So while in West L.A., I started visiting contemporary art galleries, and that’s where I discovered these Chicano art paintings at these galleries and realized these guys are good painters because I’ve seen good painters all my life and related to these paintings. So I started collecting them because I knew what it was, I had money, and an attraction to the paintings; it became the perfect storm with me starting my collection. After awhile, one of my good friends who is an art dealer asked me, “Why don’t you show your collection?” So we started looking around and found a producer of a Natural History magazine who wanted to get into it and we put together a two-prong show, and eventually, Target stores and Hewlett-Packard put up the funding to produce it. Target came back and sponsored the show for eight years. My goal was to bring Chicano art to the mainstream. My mantra had been you can’t love or hate Chicano art unless you see it. So it cleared up a lot of misconception on Chicano art because it allowed people to see it and say, I didn’t know it was this, and I like this.

LRM: Growing up in L.A., was there any influence with your artistic interest since many view L.A. as lowrider central?

Cheech: Yes, I was there at the lowrider inception in the ’50s and ’60s. I remember the pinstriping, the lowering of the cars, the lake pipes, and even the lights in the fenderwells … but the fact of the matter with lowriding is it is now mainstream like Chicano art is becoming mainstream. From the back streets to main street. We are the mainstream … so act like it.

It was a sincere pleasure talking with Cheech. Though we didn’t have time to get into more, we briefly mentioned to him whether he really realized the role he has played on screen and off being a Chicano in America. From being part of the Comedic Dynamic Duo of Cheech and Chong to showcasing his Chicano art collection worldwide, he has played a role in exposing the Chicano Connection. Though sometimes through the somewhat slanted eyes of apair of guys just partying, his comedy has shaped the funny bone of Chicano and alike baby boomers and others inAmerica in being able to laugh at ourselves, and at the same time take note that we do matter, and we are hereasa force of one from the voices of many.

The two-day Latin Fest ended with a fun-filled Friday night street party, featuring a dance competition and live street art by Cyphers (The Center For Urban Art), artist demonstrations in the art studios, and a full nightof fun for the whole family!

Chicano rock power trio Los Lonely Boys with opener Matt Anderson performed on the main stage. Other entertainment included New York-based Latino dance Ballet Hispanico. And a special thanks to Samson Fernandez for organizing the Lowrider Showcase, featuring some beautiful lowrider cars from Lifestyle, Society, and Klique Car Clubs, including Lowrider (Motorcycle) Vicleros showcasing our unique art of chrome and paint on a metal canvas. Efrain “Bugs” Gonzales was on hand demonstrating his highly skilled artistic talent as one of the country’s best pinstripers and custom painters. In this being Bugs home town, it was that much more special. The Mesa Contemporary Arts Museum was open to the public, featuring Take Ten: The Past Decade of Collecting. The Photography of Pedro E. Guerrero showcased iconic artist portraits and architectural photographs by the celebrated Arizona photographer Pedro Guerrero. And Chicano State of Mind featured eight Arizona artists whose work explores the idea that being Chicano is a state of mind that goes beyond a restrictive classification.

We wish to thank event sponsor, Modelo Especial, and Casey Blake, director of public relations at the Mesa Art Gallery and her entire staff for inviting us to be part of this event in Mesa, Arizona!