Newsletter
Sign Up today for our FREE Newsletter and get the latest articles and news delivered right to your inbox.
Home » 2016 Grand National Roadster Show 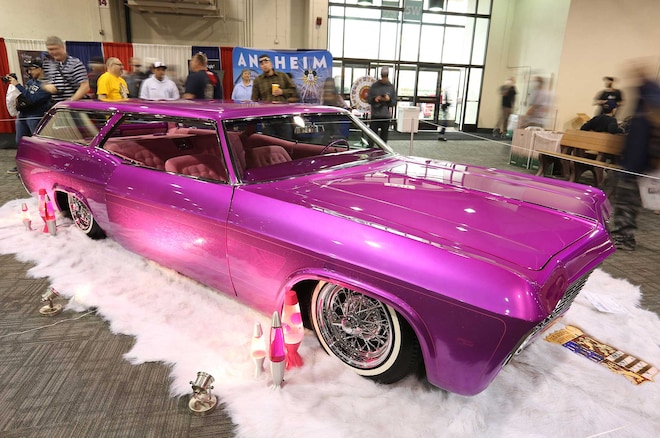 For the 13th year in a row, the Grand National Roadster Show took over the Pomona Fairplex for another weekend, filling its buildings with over 500 of the most beautiful show vehicles around.

This year’s show saw a definite blending of styles in the builds, from the bodywork to the paintjobs to the choice of accessories. There were lowriders rocking hot rod wheels, and hot rods in lowrider-style paintjobs and colors. This was a show that many times made us stop and ask, “Is this a lowrider, or is this a hot rod?”

Last year, Rudy Sandoval from Groupe Car Club debuted a beautiful blue 1973 Ford LTD, “True Blue,” that we featured as our cover car for our Aug. ’15 issue. As a follow-up to last year’s successful debut, Rudy was back again with True Blue, which he displayed alongside his latest build, another LTD, that we’ll be featuring sometime in the future.

At the end of the weekend, Darryl Hollenbeck came out as a big winner. Darryl and his 1932 Ford Roadster took home the L.A. Deuce Award as well as the title of America’s Most Beautiful Roadster. Other big winners from this year’s show include Andrew Ursich and his Ursich Customs Knucklehead, which was named America’s Most Beautiful Motorcycle, Jerry Logan and his 1960 Cadillac, which won the George Barris Kustom D’Elegance award, and Elsa Cisneros’s Chevy Impala convertible, which won the Best Restored award.

After seeing the high level of builds at this year’s show we can’t wait to see what the 2017 Grand National Roadster Show will bring us.

Features A Show Of Force

In life we are each presented with the choice to choose our paths but not always our destiny. Sometimes it takes a minor detour to realize the true purpose of our existence