Newsletter
Sign Up today for our FREE Newsletter and get the latest articles and news delivered right to your inbox.
Home » 2016 Arizona Super Show 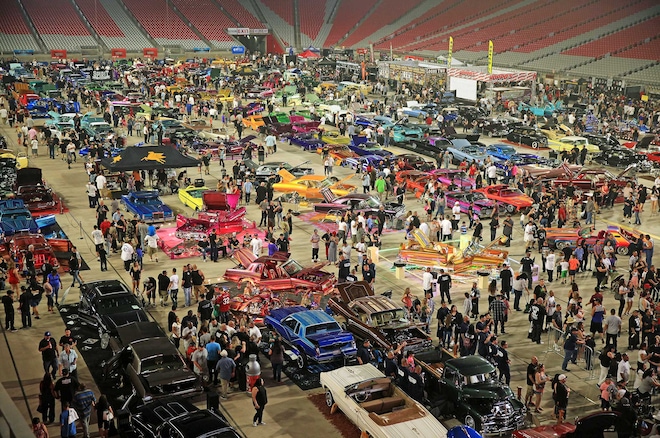 The Arizona Super Show kicked off the 2016 Lowrider Tour at the University of Phoenix Stadium in Glendale, Arizona, on February 27. This barrel cactus dome has been home to the Arizona Super Show for the third straight year. This car show and concert was an indoor and outdoor event with 600 of the best lowriders on the West Coast.

A handful of showstopper cars broke out at the show, such as Johnny Salters’ two-tone 1956 Chevy Bel Air from SouthSide Car Club. Salters is well distinguished for building stunning Chevys in South Carolina, that have been showed on both coasts.

Another car making its debut on the LOWRIDER stage was Rudy Sandoval’s red 1976 Ford LTD from Groupe Car Club. Sandoval also owns the blue 1973 Ford LTD featured on last year’s August cover of LOWRIDER. This is one of four shows were both LTDs will be displayed side-by-side.

A handful of legendary vehicles from the ’70s also displayed at the show, such as Jesse Valadez’s 1964 Impala named “Gypsy Rose” from East L.A. Another legendary car from East L.A. that came out was Joe Ray’s 1971 Buick Riviera called “Dress to Kill.”

This year’s show was code-named the “Summit of Champions” for having both the 2014 and 2015 Lowriders of the Year displaying at the show for the first time in Arizona. Bobby Garcia from Goodtimes Car Club brought out his 1987 Oldsmobile Cutlass, known as RM Series from Alamo, Texas. Chris Roark from Tradicionals Car Club brought out his 1958 Impala convertible “Final Score,” from Vacaville, California.

The show was full of heavy hitter cars, like Jesse Saldana’s 1965 Impala from Thee Artistics called “Blvd Madness,” Daryl Hernandez’s green 1964 called “Chump Change,” Jose’s 1958 “South Side Blue” from Los Angeles Car Club, Asbel Carcahe’s 1967 “Heaven on Earth,” and many more. Uniques’ Bernardo Casian and Bobby Enz are known for taking their full show bombs to all LOWRIDER-sanctioned shows and had their rides on full display.

Franks Hydraulics sponsored the hop and it features over 30 hoppers. The hop moved quick, with up to four rides hopping at the same time, while DJ Drea kicked the beats. Some of the clean street hoppers included Miles “Twin” Gordon’s 1997 Lincoln Town Car from Individuals, Page One from Westside Car Club with his Monte Carlo, and Kaoru from the Hop Shop with her 1959 Impala. The concert had a variety of artists that took the stage, like J Romero, Mob Fam, Lighter Shade of Brown, Baby Bash, and ended the night with Benton Wood. With the final performance and the stadium’s retractable roof open, the crowd made its way out to the cool Arizona night. For more information on the next Arizona show, log onto arizonasupershow.com.

hen You think of Imperials Car Club, you automatically think about the Gypsy Rose and their legacy The Imperials were the elder statesmen who set the examples and standards by which most car clubs follow today.