Newsletter
Sign Up today for our FREE Newsletter and get the latest articles and news delivered right to your inbox.
Home » Luxurious 9th Annual BBQ 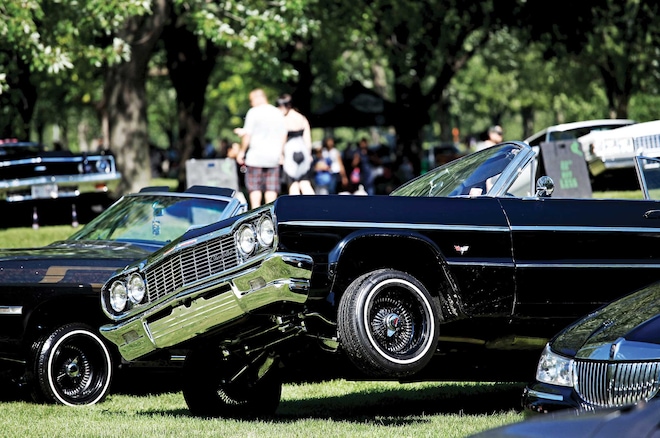 The Luxurious Car Club chapter in Montreal, Canada, threw their 9th annual barbecue at George O’Reilly Park. The park offers a large parking area and a great view of the St. Lawrence River. The Luxurious Car Club provided a free barbecue for all show participants. Car clubs from Montreal, Toronto, and all of the surrounding areas showed up, like the Majestics, Affiliated, and Loyalty Ones. The showstoppers at this traditional show and barbecue were a blue ’64 Impala and ’84 Buick Regal, from Toronto.

The show’s main attraction had to be the hop. With over $1,000 in prizes, there were plenty of switch-happy participants. Jeff “Skinny” Forgione of “Switches And Thangs” from Toronto was on the switch most of the day, as he had build most of the hoppers participating in the hop. The real excitement happened when 9-year-old Adam Giroux, son of Luxurious club president Abel, came into the hop pit. Little Adam hit back bumper with his ’87 Oldsmobile Cutlass. This isn’t anything new either because this local hop star has been hitting switches since he was 5. Unfortunately though, the hop had to be cut short due to the rain, but not after a great day at the park with the Lux Fam.