Newsletter
Sign Up today for our FREE Newsletter and get the latest articles and news delivered right to your inbox.
Home » 2016 Musink Festival 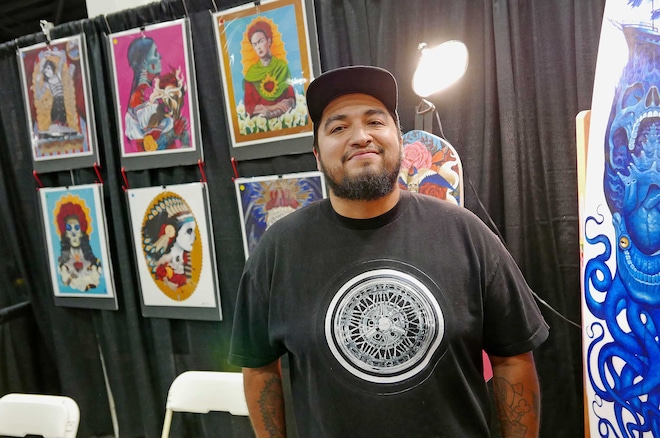 At the show we met several tattoo artists, including Bay Area artist Marco Ojeda. This talented artist is more than a one-trick pony as he is well skilled in airbrushing and graffiti. Another tattoo artist we met was Phil V. Pinos of Germany. Pinos was at his booth with his gorgeous girlfriend, Nina Sphynx. Nina displayed a vicious throat tattoo by Phil of a sphinx cat head that caught everyone’s attention. We later found out that Sphynx entered that Miss Musink contest and was declared the 2016 Miss Musink winner.

At the festival we also got to see our friend and Lowrider Arte cover artist Gustavo Rimada. Rimada informed us that he will be painting one of the infamous bridge beam that run through Chicano Park in San Diego. We hope to bring you coverage of that once his work begins. Another oil painter that was at the show was Jesse JRF. Jesse’s paintings reflect his love/obsession with avocados.

This year we saw the return of the Low & Slow Car Show at Musink. A handful of lowriders and custom cars came out, like Jason Wallace of Huntington Beach, California. Jason is a member of Dukes and had his 1952 3100 truck next to the Tovar’s 1939 Chevy. Greg DeAlba from Elite Car Club bought his turquoise 1991 Cadillac that displayed a mural by Sal Elias. We ended our night at Musink by checking out Snoop Dogg on stage. Snoop performed classics such as “Lodi Dodi” and “Ain’t No Fun” from his Doggystyle album. We had a great time and can’t wait for next year’s festival.