Newsletter
Sign Up today for our FREE Newsletter and get the latest articles and news delivered right to your inbox.
Home » 2015 Lowrider Las Vegas Super Show 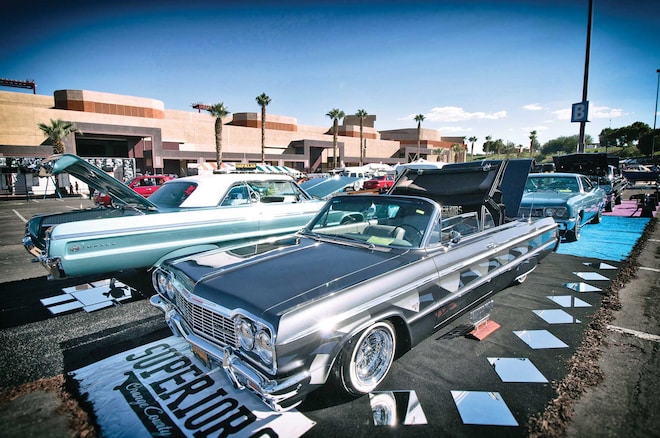 For almost a couple of decades now, Las Vegas has been the home to the baddest, custom-painted, gold leafed, and chrome undercarriage creations displayed in the ultimate showdown. Every year, thousands of lowrider fanatics continue to flock to the High Roller City to see the real “Glamour and Glitz” of Las Vegas. The Lowrider Super Show brings out the best of the best! Every car club is challenged to bring out only their elite rides to be showcased at this one-of-a-kind show. Turntable displays, plush carpeting, show signs, and mirrors, can only complement some of the top unimaginable builds that compete for the top honor awards.

This year’s 2015 Super Show saw the level of quality custom and traditional car builds rise up again, almost as like a tradition that is expected annually. It was the year of the ’58s, where we saw a ’58 Nomad wagon dramatically become an El Camino and another ’58 sporting a ZL1 Supercharged crate motor under its hood. Down the aisle appeared another radical gold convertible ’58 Impala, which eventually took home the coveted Lowrider of the Year Trophy.

There were so many one-off classic and custom lowriders indoors and outdoors that just about anyone who had a cell phone in hand became a professional photographer or videographer. Though there was an eye-catching glass roof, frontend tilted forward Regal, and a magenta flaked “Top Notch” ’61, what became more noticeable at this show was the influx of bombs. There was a quantity of quality, mint, and full-custom conditioned Chevy Fleetlines, Master DeLuxe, Buicks, and Pontiacs on display and all over the place.

Also growing in exhibit attendance is the custom culture of lowrider-styled motorcycles that came in droves rumbling into the show. In recognition of this growing phenomenon, that mirrors the images of their four-wheeled counterparts by way of custom paint, whitewall tires, spoke wheels, lowered and chrome accents, Harley-Davidson was a Super Show Sponsor, as they contributed also in support along with a huge indoor display of bikes. They also gave out gifts and awards to their loyal riders.

Lowrider fans from all parts of the world attend this show, almost as if it were a holiday event. They come to see the Glasshouse Caprices, the Tri-Fives, ’60s model Impalas, Buick Rivieras, Cadillac convertibles, G-bodies, and LTDs. There were a few “dare to be different” rides that caught the eye, like a few Packards, a baby ’55 T-bird, and a Lincoln Mark 3. Just about every traditional car club was represented in theme-printed anniversary T-shirts or embroidered logo stitching on Dickies work shirts. The Majestics, Good Times, and Uso Car Clubs were represented by numerous cities throughout the U.S. and beyond. The Dukes, Imperials, Oldies, Lifestyle, Groupe, Impalas, Rollerz Only, Los Angeles, Stylistics, Antiques, and the Klique Car Clubs were there in masses, but the one who was a car club all by himself, and made his presence felt throughout the show, was Lowrider Hall of Famer Kita Lealao, who was the most loved and appreciated man there. Knowing that Kita made a visit made this show perfect and complete.

There were mariachis, on-stage rap stars, an Invitational Hopping Contest, and novelty booths throughout the show. Hoppos Hydraulics and Krazy Kutting, along with DGA T’s were the Lowrider sponsors who had continuous crowds gathered amongst their merchandise all day long. LOWRIDER Ultimate Car Care Products were given away to many of the owners of show cars throughout the venue so that they could compare and eventually replace their old wax and cleaners that can’t match up to this LOWRIDER licensed and guaranteed better result products.

LOWRIDER photographer Beto Mendoza walked the miles of aisles for three days snapping away at this Super Event. There were other photographers on the scene to help with coverage of this Show as well, from Stephanie Bueno, Sara Silva (Wify), Hector Leyva, Volo, Fernando Deanda from Texas, and veteran photographer Takashi himself, who has never missed a Super Show as long as he’s held a camera. To witness the entire show’s experience and enter to get your free ticket go to www.lowridermagazine.com.

Ridiculous time, hard-earned work, and money went into this show and you can place your bets in Vegas that next year’s stakes will be higher again, as this lowrider game has no limits—just ask our judges who have to sift through every detail and eventually decide on a single winner for every category, when they know everyone deserves a First Place award. See you next year!

Erik Wisterman and his ’62 Chevy Impala

Original of the Year: Jesse Lopez of Traditionals Car Club and his ’59 Chevy Impala

Traditional of the Year: Abel Zavala of Imperials Car Club and his ’64 Impala Super Sport

Bomb of the Year: Chris Melendez and his ’51 Chevy DeLuxe

Lowrider of the Year

Lowrider of the Year: Chris Roark of Traditionals Car Club and his ’58 Chevy Impala