Newsletter
Sign Up today for our FREE Newsletter and get the latest articles and news delivered right to your inbox.
Home » 2015 Cadillac Fest 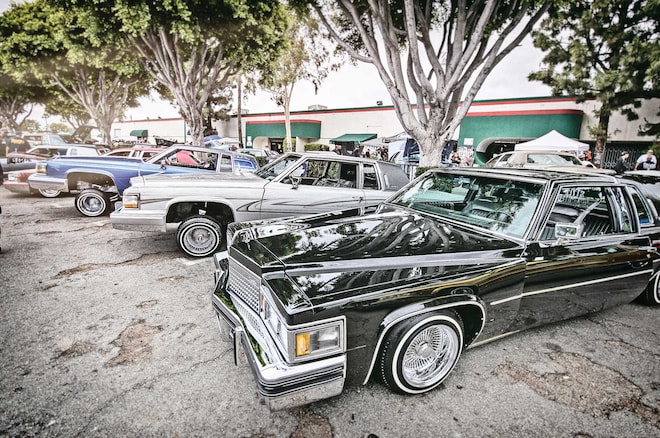 With over a century of Cadillac history, Mike Lopez aka “Cadillac Mike” decided to create a platform where all the makes and models that helped turn Cadillac into a symbol of excellence, luxury, and American tradition could be showcased. Going on its fifth year, 2015’s Caddy Fest featured some of the industry’s top Cadillacs on display. Its new, bigger location offered aisle after aisle of original and full-custom cars.

Style Unlimited, Majestics, Maniacos, and Big Tymerz were just a few of the car clubs out in full force showing off their latest Cadillac creations. The legendary Lifestyle Car Club displayed a few of their LOWRIDER magazine cover cars, such as Rick Ortega’s “Eyes Without a Face” and Bobby Flores’ “Cotton Caddy,” as well as the crowd favorite “Game Over” of Rollerz Only Car Club. TJ of “The Avenue Customs” (located in Las Vegas) surprised the crowd by chopping the roof of a Fleetwood Cadillac and turning it into one of his signature, fully functioning convertibles. Throughout the day, attendees watched as TJ and crew sawed, grinded, and welded the convertible trim and rack into place. This free car show had it all. Attendees enjoyed vendors, such as Ojo Rojo, who was giving out samples of their delicious bloody beer mix. Along with Curious Entertainment bumping those classic old-school jams, Caddy Fest has turned into a “must attend” event.