Newsletter
Sign Up today for our FREE Newsletter and get the latest articles and news delivered right to your inbox.
Home » Albuquerque Lowrider Supershow – Lowrider Tour Stop 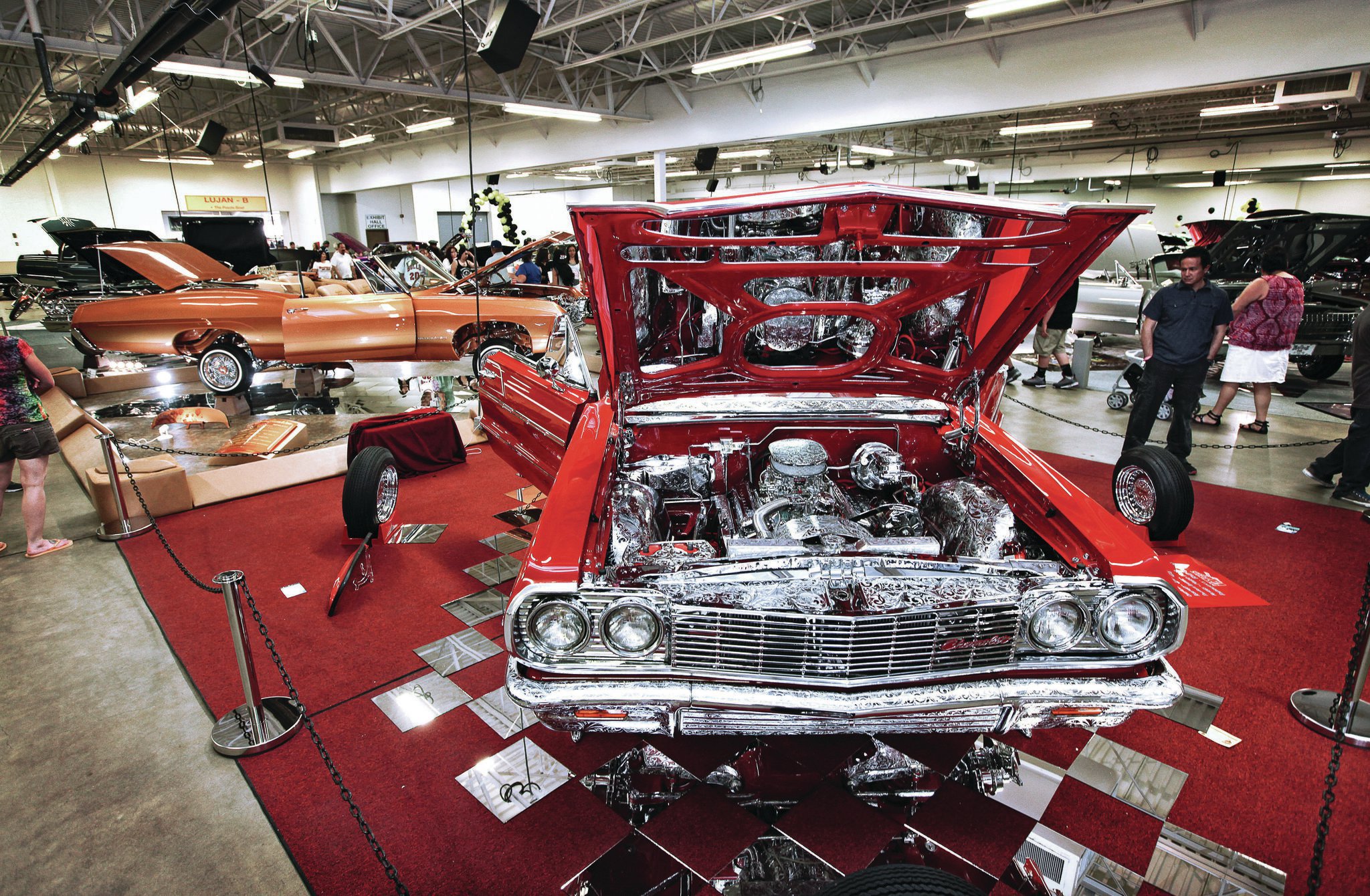 The return back to the Land of Enchantment is never a disappointing trip if you’re into lowrider culture, arte, and New Mexico cuisine! Eppie Martinez along with Reds Old School Hydraulics, Escobar Entertainment, Old School City, and Budweiser hosted this year’s Albuquerque LOWRIDER Magazine Sanctioned Supershow and did so in true fashion as they returned to the Expo New Mexico Fairgrounds. Well known for its lowrider roots, the New Mexico show displayed a variety of bomb and traditional car clubs, filling the numerous indoor buildings within the historical fairgrounds. The event hosted over 250 car entries indoors, while another 200 exhibitors were displayed on Expo’s Main Street. Those in attendance enjoyed a lowrider weekend full of beautiful weather to complement the sights and sounds familiar to all of us who regularly cruise the car show circuit.

With a car hop hosted by Reds Old School Hydraulics, the Supershow literally got off the ground as competition winners were given cash awards to kick off a day full of entertainment. James Rivas, aka The Manic Hispanic, and “Charm” Natalie Trujillo co-hosted this year’s event, engaging the crowd of thousands with an old-school/new-school concert that blended Latin, hip hop, rap, and oldies. Troublesome Kozme and female sensation, Charm, opened things up for the main stage lineup followed by performances from Lowrider legend, Rocky Padilla, as well as Baby Bash, and the one and only Kid Frost! To end the night, lowrider oldies master himself, Brenton Wood, closed the show by singing a plethora of the hits that only he can master.

This year’s New Mexico Supershow presented a variety of awards, including a very special award honoring a three-time world champion car builder also considered a hometown individual who played a vital role in nationalizing lowriding. New Mexico Champion, Ken Jacquez, and his engraved ’64 Impala convertible earned the George Jaramillo Memorial Award, while qualifiers for the 2014 Vegas Supershow included Best Car winners like Third Place Nano Navarez with his amazing gold ’58 Impala of New Breed C.C. Second Place honors went to EZ Garcia with his radically built two-door Cadillac Fleetwood representing Rollerz Only. Best of Show was awarded to Fred Rael of Prestigious C.C. in his ’67 SS Impala. Walking away with Third Place in the Best of Show Trucks was Antonio of Low Classics and his ’87 Nissan. Next was Tomas Quirez of Rollerz Only who earned Second Place and lastly, best overall went to Bobby Enz of Uniques C.C. with his 1950 Chevy truck that has faithfully followed this year’s Lowrider Magazine Tour.

Bombs were also a big part of this year’s show with the Best of Show Bomb award going to Bernardo of Uniques C.C. and his 1950 Chevy beauty. Second Place was awarded to Javier of Old Memories C.C. with his 1954 Chevrolet, while Third Place went to Richard who was representing Dukes C.C. at the show with his 1946 Chevrolet. The traditional class was once again full of heavy hitters as Imperials’ Abel Zavala protected his traditional title against Prestigious C.C. who followed with a Second Place award handed to Ken and his ’64 Impala. Meanwhile, Juan Cruz’s ’62 Impala came in Third Place.

Best of Show Original winners were Nester of Viejitos C.C. earning Third Place, Martin Maldonado of Oldies C.C. with his immaculate ’36 Chevrolet convertible coming in Second, and Best of Show staying with Porfie Maldonado’s crispy clean 1937 Chevrolet on behalf of Oldies C.C. Best Bike and Trikes were combined this year with Benny Vigil of Laying Low taking Thrid, Elisha of Latin Desire as the runner up and First Place awarded to Raul Rivas of USO C.C. With over 40 motorcycle entries at this year’s show, Chris Florez of Viejitos walked away with Best Motorcycle of Show. Providing full support this year was Rollerz Only C.C. who received recognition for their efforts with awards for Most Members and Club Display.

Lowrider Magazine would like to sincerely thank all who made the show possible, especially The Eppie Martinez family, Javier Perez family, and local volunteers. The same goes for our sponsors Reds Old School Hydraulics, Budweiser Premier Distributing, Old School City, Pablo Trujillo of Escobar Entertainment, and the official LRM judging team. We’ll see what next year brings, but as for this one, the lowrider community once again enjoyed their time spent in The Land of Enchantment, while LRM was in town.