Newsletter
Sign Up today for our FREE Newsletter and get the latest articles and news delivered right to your inbox.
Home » The Lowrider Arizona Supershow 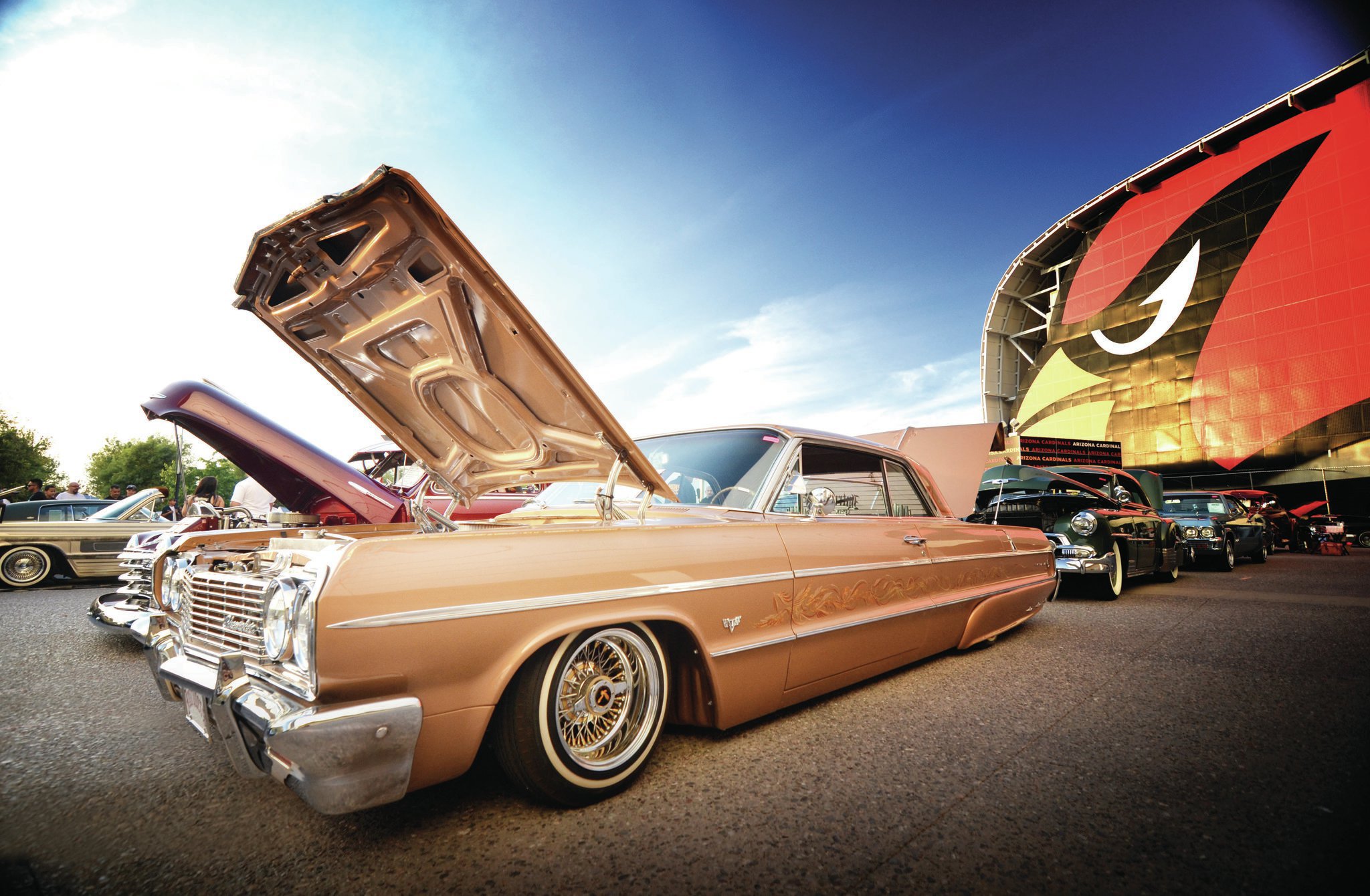 As Senior Judge Mickey Horton was preparing the main stage for award announcements as he’s done for hundreds of shows over 25 years at various LOWRIDER Magazine tour stops, he leaned over to Head Judge Danny Ochoa and myself and said what I believe was the “a’ha” moment for the three of us. He said, “Do you guys realize that we produced one of our first car shows at the Superior Arizona High School football field, and now 30-some years later, we are announcing awards for an event we produced at the University of Phoenix indoor stadium, home of the Arizona Cardinals and 2014 NFL Superbowl!?” Now that’s a journey… and what a ride! We feel so blessed and humbled by the opportunities and meeting so many beautiful people along the way.

Previously, the LOWRIDER Magazine tour stop in Arizona has had many homes. We started in the desert at Firebird Lake in 1979. It made its way to the Phoenix Civic Plaza, and then to Mesa Convention Center and Amphitheatre. After 17 years there, it traveled to Arizona Fairgrounds, and then back to the Mesa Supershow.

This year’s Arizona tour stop was sponsored by Krazy Kutting and Logos Two as they helped in support of this special event to become a first in many ways. First time a LOWRIDER Supershow was hosted in a state-of-the-art all indoor NFL stadium — the University of Phoenix Stadium, is rated one of the top venues in the country! With our new location announcement, we were anxious to gauge its response. This year’s LOWRIDER Magazine Arizona Supershow broke all attendance and exhibitor records since LOWRIDER’s debut in 1979 in the Grand Canyon State. And another first… first time an NFL stadium ran out of hot dogs for an event! They surely weren’t expecting LOWRIDER fans to show up in full force!

Though there were a few challenges due to experiencing a new venue and security measures in dealing with an event of this magnitude, overall our lessons learned generated an improvement plan in place for 2015. This year’s event was a joint effort for Motorsport Showcase and The Arizona Supershow LLC headed by Tony Herrera. Tony was determined to partner up with Motorsport Showcase and make an impact that would ensure a true Supershow ranking for the LOWRIDER Magazine tour stop.

The Supershow featured two stages of entertainment. The plaza stage hosted by Big Latin Andy Herrera featuring a variety of artists who traveled from near and far to be part of LOWRIDER history. This year’s Supershow indoor main stage had a LOWRIDER all-star entertainment lineup that included Official Motorsport Showcase Host “Manic Hispanic” who gives lots of love to the lowrider community on his daily radio show. Manic started the show with DJ Madd Rich, followed by the band Contreband.

Franks Custom Hydraulics hosted this year’s Super Car Hop Expo, featuring some of the industry’s high-flying masters that provided the audience a great tease for Frank’s annual After Hop! The crowd also responded as the entertainment lineup resumed with actor and rapper, Troublesome, who made his main stage debut in Arizona. LV Sharp, Mr. Capone-E, Cece B, and Mob Fam kept the throng of crowds entertained and Arizona’s own MC Magic broke out with a few cuts from his new album! Baby Bash was in the Red Zone jamming all his hits and Lil Rob never disappointed the crowd with his homeboy hits!

While Lil Rob was performing to Summer Nights, the University of Phoenix Stadium roof opened up to expose the beautiful Arizona evening stars! Mega 104.3 FM artists Jalil & Exstacy Of Whodini made the trip from Atlanta to perform their solid gold old-school hits “Five Minutes of Funk,” “Freaks Come Out at Night,” and “Friends.” DJ Baby Chino returned and spun the turntables as he has recently done on The Arsenio Hall Show and his new Vegas show! Successful Grammy-winning singer, songwriter, vocal producer and engineer, Eric Bellinger impressed the ladies with his new hits. Headlining this year was multi-hit top Billboard artist Kid Ink hosted by Power 98.3, who killed it in his first LOWRIDER Supershow debut!

Though the entertainment was first rate, the cars were truly the stars and it showed with top contenders from the Southwest competing for over $15,000 in cash and prizes. Taking home Best Lowrider Car of Show was Elite’s newest lineup Leader “Spirit Runner” ’74 Monte Carlo owned by Brandon Gonzalez. Brandon also took home the Prestigious Arizona Champion Steve Schmitz Memorial Award and Second Place overall bonus points as well.

Best Original ’69 and below winners looked like they drove right off an old movie set with Third Place going to Cruz of Brown Society with his impressive 1956 Bel Air. Second Place honors were presented to Salvador Mendez with his Blazing Black 1937 Cadillac from Oldies CC. And Oldies came to impress with the First Place original winner going to Porfie Maldonado in his rare 1937 Business Coupe. The Best of Traditional Class was outstanding with a ’60s theme. Anthony Florez with his 1966 Caprice took home the Third Place, and Junior Espana representing Elite CC managed Second Place nicely with his 1963 Impala convertible. Able Zavala came up on top with his Imperial Material ’64 SS Impala.

The Best of Show Bomb winners were all true veterans. Third Place honors were presented to Cesar Rodriquez of Oldies Car Club with his brilliant gold ’48 Fleetline. Second Place was presented to Candelario Mendoza all the way from Odessa, Texas and Taste of Latin Car Club. Taste of Latin Founder and Lowrider Hall of Famer Nick Hernandez made the trip to support his members. Current LRM Bomb of the Year Champion Gene Bare representing Rollerz Only CC only lives just a few blocks away captured his 2014 qualifying Best Bomb of Show honors along with the First Place Overall bonus points cash award.

Best Motorcycle of Show was presented to Torch Industries with their hand-crafted one-of-a-kind 1965 Pan Head. This motorcycle was modified beyond your typical custom. The mods were so pristine, only a journeymen builder could truly appreciate the differences. We also want to give our sincere apologizes to our Best of Show Trike winner David Cervantes. There was an error in announcing his name at the awards presentation, and this was twice for us in failing to announce it last year at the Mesa Supershow. David, thank you for your patience! Second Place Best Trike honors went to Abraham Rosales and Third Place went to Uriel Leon of Memories CC.

Best of Show Bike winners were Paul Sanchez of Goodtimes winning Third Place. Cierra Careaga representing Groupe CC earning Second and Daniel Carnejo taking top honors from Legends Bike Club. Car club awards were presented to Intruders CC for Most Members and Spirit CC earned The Best Club Display award. A few other outstanding features from this year’s Supershow were the notable presence of bombs all under one roof and being showcased in our Lowrider Hall of Legends display. All Old Memories Car Club chapters were represented with close to 30 bombs indoors and outdoors! Chapter presidents made this a mandatory show for Old Memories which had an impressive lineup in the Hall of Legends Isle and the Plaza along with Oldies Car Club, Phoeniquera Classics, Viejitos, and Dukes, to name a few.

This Supershow could not have been possible without our exceptional presenting sponsor Blue Cross/Blue Shield of Arizona. Contributing sponsors also included Hensley Beverage Company featuring Budweiser, The UFCW, West Valley Resort, Sabritas by Frito Lay, CopperPoint, 3 Amigos, Logos Two, Krazy Kutting, Leading Edge Auto Paint and Supplies, and Old School City. LOWRIDER Magazine and I would like to thank the Motorsport Showcase staff and Ochoa family members along with Tony Herrera and The Arizona Supershow LLC staff members who put in a great deal of effort and work in producing this year’s Arizona Supershow!