Newsletter
Sign Up today for our FREE Newsletter and get the latest articles and news delivered right to your inbox.
Home » Las Vegas 2013 Super Show Of Shows 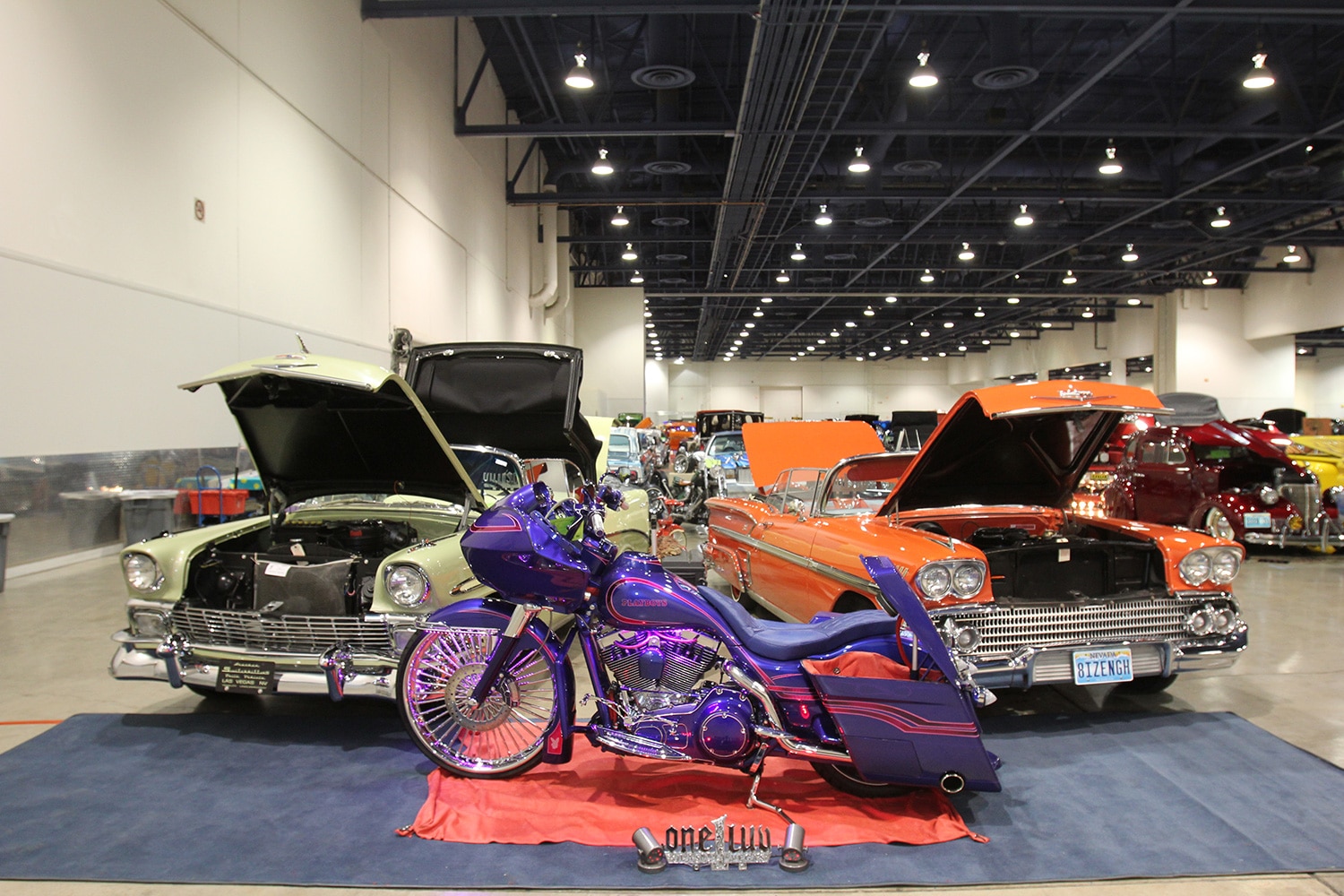 As anticipated, the 2013 Las Vegas Lowrider show held this past October was completely sold out. The show’s attendance was no surprise, and neither was the volume of incredible builds on hand, as nearly 900 of the nation’s top lowriders filled the exhibition grounds. Some have touted this annual show as “the show of shows,” given its reputation for being the Super Bowl of lowriding. This year was a perfect example of this adoration, as show sponsors Lucas Oil, UTI, Krazy Kutting, Lowlife Hydraulics and DGA Tees made sure the show was a success.

One of the biggest draws to the show is the suspense surrounding which rides will stun the crowds and judges, and which owners will pull out all the stops in a battle for Lowrider supremacy. The competition is fierce, and while the faces may change from year to year, the stories of adversity and overcoming challenges stay the same. You’ll hear of owners frantically trying to add a few last-minute touches to their cars; only to wind up missing the move-in and missing the show altogether!

For this year’s event, folks started arriving on Thursday to line up and try and get prime locations for the show. With the current Lowrider of the Year on its way out; the rumor mill was running rampant about which cars would be worthy of taking its place. The truth to the matter is that there was only one close to being able to take the crown. That car was Bobby Garza’s Texas-themed ’87 Cutlass, and while Bobby and the Cutty gave it their all, they were simply outnumbered in points by Albert De Alba’s “El Rey;” which clinched the title for the third straight year and retired as an undefeated champion! The freshly redone ’74 Monte Carlo, “SpiritRunner” owned by Brandon Gonzalez, surprised the completion by rounding off the top three.

Another pair that put a hurting on the truck sweepstakes class was the Nokturnal boys Hector Esquiveland with his ’98 Chevrolet Tahoe, “La Reina,” and Juan Esgurda’s ’03 Lincoln Navigator, “Massive Destruction,” which locked in a duel for first and second place. Enfeno Valeiano, of Aztlan Mexicalie, took third place with his ’51 Chevrolet truck.

Some of the attendees from Vegas included the Royals CC and their flagship cover car “Pretty Penny,” in addition to The Street Players CC; who debuted a strong lineup that included the “Blueprint 2,” owned by Big Dre, followed by the show-stopping King of Vegas’ ’57, “the BluePrint.” Other Vegas clubs included The Desireable Ones, who proved that they didn’t need 20x20s to look strong as “Life After Death,” started off their lineup.

This year, Lifestyle CC was back in the limelight, as they kept up their tradition of breaking out new cars and surprising the field with freshly redone cars. Heading up the club’s lineup was Danny Lugo, with his ’69 Caprice, “Paranoid,” and the club’s showing was capped off by Joe Rodriguez’ ’68 Riviera, “Rivilicious.” When it came time for Bombs, the Oldies car club looked as strong as their 12-car lineup, which handily showed why they deserved to be inside.

The big clubs at the show included the Majestics, who rolled in deep as usual to this main event. The Majestics had several new cars on display, including a new black ’66 Impala that I’m sure we will see in a future upcoming issue of Lowrider. The Rollerz Only made their always solid appearance. USO car club showed strong as they brought out most of their club’s chapters. The GoodTimes CC made it known in Vegas that they are one family club that will be here to stay. The Impala’s car club was one of the other clubs that people couldn’t help but take notice of, as their club family keeps on growing. High Class CC looked like a strong contender with their lineup, which started off with “Still Balin” and was followed by several other quality builds.

With close to 900 cars on display, this judges nightmare went in to overtime as always, and though it is also impossible to do justice for every car that put the time, money and sacrifices into their builds in one featured article, please accept our apology for not being able to include everybody in this coverage. One that we simply couldn’t forget was Jae Bueno’s ’62 tribute Impala wagon, brought out by Stephanie Bueno and family friend, Joey Hernandez. Another one that stood out was a candy blue ’61 Impala that was put together by the Toma Brothers. Elite also had a few cars that broke out at the show, including the long-awaited “Purple Haze,” a candy painted ’64 Impala. The old school setup was something to admire, as a few quality builders put their hands on the vintage build. The Just Dippin’ car club stepped the game up as well, thanks to a strong debut from an immaculate, jet-black ’62 Impala.

With weather looking good during the move-in and throughout the weekend, the fire marshal deemed the area safe for the crowd, and then the musical performances went on as Mellow Man Ace started off this year’s concert. He was followed by MC Magic, Lighter Shade of Brown, Lil Rob, and legends Rodney O & Joe Cooley, who had everybody rocking and ready for show headliner WC.

The only drawback for the annual Lowrider Super Show is that it always goes by in the blink of an eye, despite the year-long preparation and anticipation. This will always be the case, as the long nights spent working on builds to prepare them for the one-day event at Cashman Field in Las Vegas pays off for some, and is a crapshoot for others. With a confirmed date of September 21 for next year’s Super Show, we will have to see how the cards play out for next year’s Lowriders that come out and compete. With that said, keep an eye out for next year’s rules as there will be some changes that need to be made to better our industry as a whole. So until then, keep on Lowriding and we will catch you at the next Lowrider show.

Best of Show Original ’69 and Below