Newsletter
Sign Up today for our FREE Newsletter and get the latest articles and news delivered right to your inbox.
Home » 13th Annual Imperials Car Show & Concert 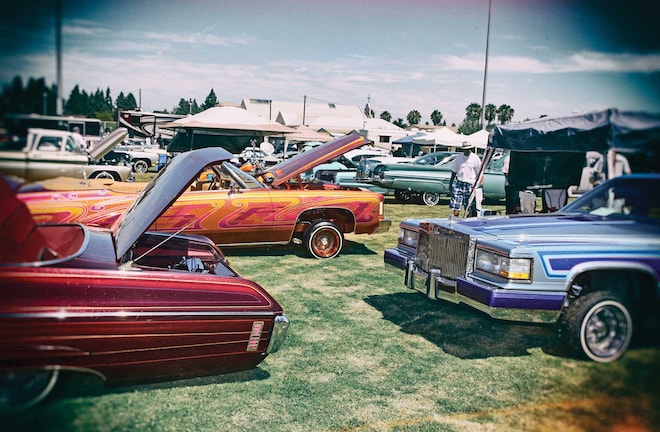 This year, the Imperials Car Club celebrated their 50th anniversary as well as their 13th annual car show and concert at the Pharis Fedde Middle School in association with the city of Hawaiian Gardens, California. With perfect summer weather, the middle school grounds filled up with 600 cars. Car clubs from almost every area in Los Angeles showed up early in the morning to get themselves a spot in jam-packed show. Some of the clubs that showed up in full force included Stylistics, Groupe, Techniques, Viejitos, Old Memories, Dukes and many others.

A few of the cars that caught our eye included Gypsy Rose, the iconic car from the Imperials Car Club. This legendary car sat in the start of the long lineup of Imperials cars. Another standout car included a 1939 Packard limo from Viejitos Car Club and owned by Solo. Packards are a rare sight and even rarer to see one as a limo. If it wasn’t for the third-row seating found inside, one could easily confuse this for a hearse. Rudy Sandoval from Groupe CC had his 1973 Ford LTD named True Blue at the show. Ford LTDs are also a rare sight and this one demanded the attention and respect of the Chevy guys.

Imperials Car Club of Los Angeles would like to thank all the car clubs, solo riders, car enthusiasts, volunteers, vendors, and spectators for making the 13th annual Imperials Summer Benefit Car Show a success. All proceeds will benefit the city of Hawaiian Gardens Youth Athletics Leagues, so if you haven’t gone, we suggest you pay the $5 cover charge to check hundreds of custom lowriders, while doing something positive for the community.