Newsletter
Sign Up today for our FREE Newsletter and get the latest articles and news delivered right to your inbox.
Home » Imperials Car Club Denver 20th Anniversary BBQ – Web Exclusive 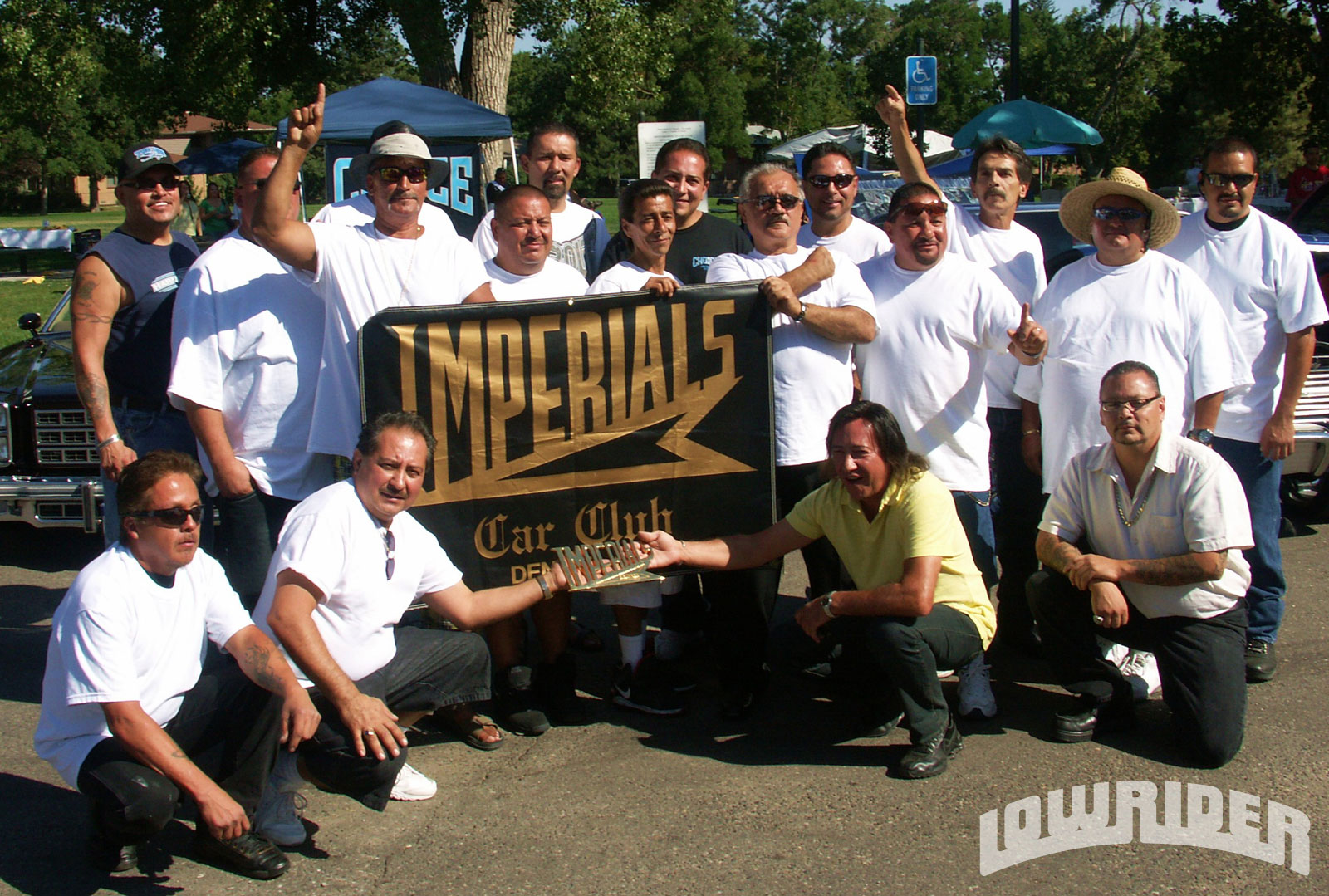 The name “Imperials” carries a lot of weight within our Lowrider culture, and just the mere mention of that word brings to mind the very car club that it represents. This long standing car club has a rich history full of some amazing people who have played an integral part in the club’s revered legacy. With the recent and unfortunate loss of club veteran Jesse Valadez, owner of the iconic “Gypsy Rose,” the Imperials Car Club has been lodged within the forefront of our hearts. Naturally, when I got the invitation to attend the 20th anniversary barbeque for the former Denver Chapter, I jumped at the chance to join in the festivities.

The weather for the event was glorious, as a warm September Sunday at Sloan’s Lake in Denver, Colorado played host to the barbeque. I was immediately greeted by the sight of Lowriders in the parking lot, kids playing on the playground, and the smell of marinating meat on the grill, filling the air. A bevy of local clubs and chapters came to the park to help celebrate this event as well. ShownLow, Choice, Viejitos, TruImage, City Wide, Masterpiece, Low Impressions, Rollerz Only, Latinos Pride, and Showoff were just some of the car clubs that made the day even more spectacular. The day was reminiscent of what the Lowriding scene may have looked like back in the glory days of the ’80’s and ’90’s. With the DJ playing oldies that took me back to my childhood, and chef Luciano Casias grilling the carne on the grill, the nostalgia made me wish I could spend every Sunday afternoon like this.

After strolling through the parking lot to admire some of the customized cars on display, I stopped to meet up with Stephen Herrera, one of the organizers of the event and a former Imperials Denver Chapter President. We sat down at one of the park tables that had a photo album sitting there along with a small wooden Imperials plaque. As I started turning the pages of the albums to see the faded photos of the past, I realized; this is where the story of the Denver Imperials began.

In 1983, Jesse Valadez along with Denver local, Dennis Duran, agreed to open up the Denver chapter of the Imperials. Dennis Duran was the first Denver Chapter President for the club, but shortly thereafter, Dennis handed over the reign to Sonny Herrera. During this time, the Denver Imperials organized car shows, dances, and fundraisers. Of course, being a Chapter President of a big name club can be demanding and over time, Sonny decided to step down as President and Sonny’s brother, Stephen Herrera, took over the club in 1985. Stephen continued the clubs success by organizing more shows with concerts and big name sponsors involved. The club was blossoming during these glory days of Lowriding. These were days filled with zoot suits, beautiful models, Tru Spoke wire wheels, Targa-topped Monte Carlos, and a sense of unity within the Lowriding community that would give any Lowrider a true sense of pride. The club had become a staple within the community during these times as well, thanks to their charity efforts and the overall presence of the club.

With times changing and the shift of interest from Lowriding to Imports and Dubs, the Denver Imperials collectively decided to close the chapter in 2003. Keeping this in mind, I asked myself, “Why the delay in recognizing the 20 year era of the chapter?” I found out that the recent passing of the first Denver President, Dennis Duran, really prompted this long overdue celebration of what the Imperials had accomplished in the Mile High City. The old Imperials members still hang out from time to time, and they plan on having more reunions in the future. “I will be Imperials until I die,” stated Stephen Herrera, giving a nod to the powerful bond that the Lowriding lifestyle can produce in conjunction with such an iconic name.

As the day came to a close, I left the park with a sense of kinship that made me thankful for getting a chance to spend the day with the old Imperials family. I would like to thank Dennis Duran, Sony Herrera, Stephen Herrera, and the rest of the Imperials family for the hospitality given to me and for letting me have a glimpse of what they have grown to love. These guys certainly helped to pave the way for many more up and coming clubs in Denver and surrounding areas, and the respect they have within the scene is proof of that. As this part of the Imperials Chapter comes to a close, we can rejoice in knowing that their strong legacy means that the Imperials name will continue on for years to come.