Newsletter
Sign Up today for our FREE Newsletter and get the latest articles and news delivered right to your inbox.
Home » Society Car Club’s 30th Anniversary – On The Scene 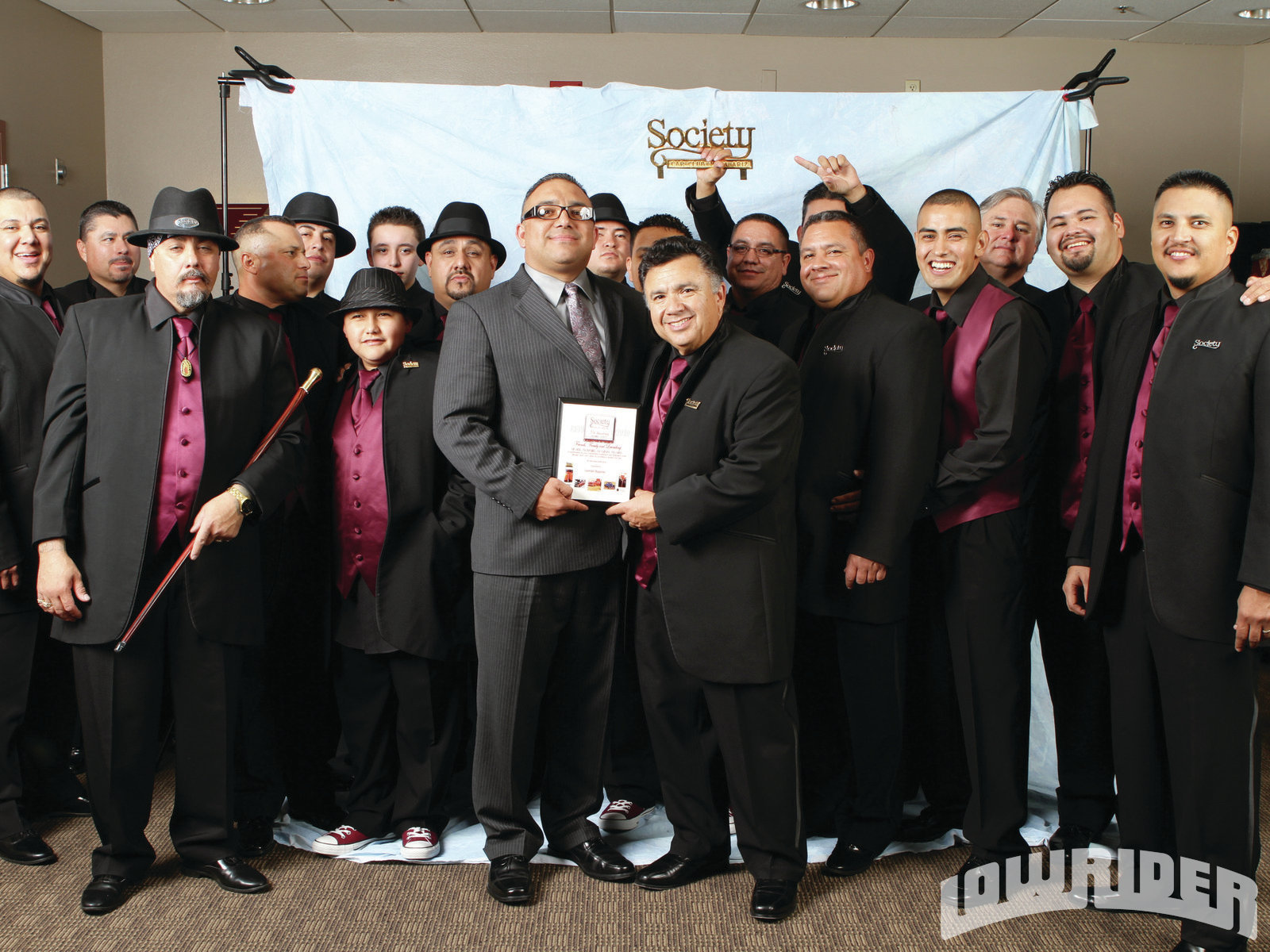 Commitment is often measured in increments of time. The longer the commitment, the more respect is due, and this is certainly the case when that commitment has stretched for three decades. Respect is certainly due to Society Car Club, and that respect was paid in tribute in the form of the club’s 30th anniversary this past December. Paying homage to their principles of friends, family, and Lowriding, it was only appropriate that the car club anniversary party be held at the same place the club held seventeen successful car shows; the Mesa Convention Center. The Palo Verde Ballroom was at capacity in hosting four hundred of Society’s closest friends, each on hand to celebrate this milestone with them. Many car club representatives from Spirit, Lifestyle, Imperials, Identity, Intruders, Phoeniquera Classics, United, Intimidations, Groupe, USO, Techniques, Phoenix Riderz, Klique, Ariza, Rollerz Only, Central, Slow Lane and many others came out to show their respect, and it was truly appreciated. There were also special guests honored during the evening as well. Manny Frklich of Budweiser (Hensley Co.) was presented an appreciation plaque for his involvement in the company being fifteen year sponsors of the Society Mesa Super Show. Eddie Zamarron, of Lowrider Magazine’s Lowrider Events and The Lowrider Hall of Fame, accepted an award on behalf of LRM for their dedication to the Lowrider movement and their role in keeping the Lowrider Movement alive on the streets. Also on the docket for the evening was a special appearance from actors Richard Yniquez and Robert Covarrubias, whose roles in Boulevard Nights marked the first time Lowriders took center stage and captivated silver screen audiences in 1979. The award presentation began with a beautiful video presentation created by Mandy Ochoa, which focused on memories of Society’s thirty years of cars, friends, family, and devotion to Lowriding. Furthermore, each active member was presented with an appreciation plaque to thank them for their years of dedication and service to the club.

During its 30-plus years of Lowriding, there have been three people who have held the office of President. Founder Richard Ochoa presided for the first twenty years, establishing the groundwork and foundation that has guided the club to legendary status within the community. He then passed the torch to his brother, Danny Ochoa, the longest active member of the club. Danny had the fortitude, drive, and determination needed to keep the club alive and focused going during its most trying times, and his work solidified the legacy that preceded him. Danny then passed on the presidency to Bobby Quihuis, who is doing an outstanding job in mixing tradition with new generation ideals and the ever-advancing technology of modern car clubbing, taking the club into its third decade and on to the future. Also, Society has had two past Vice Presidents, Rolando Caudillo, and Jesse Duarte. Both men unselfishly gave their time and dedication to the club and they earned their respect and admiration by being true leaders. Without a handful of lifetime members still flying colors; guys like Robert Alonzo, Mickey Horton, Jerry Garcia, Steve Medina, and Ronnie Romero, there’s a good chance the club would not be here today. These veteranos are the heart and soul of the club, and they have provided the backbone necessary to guide others through the trials and tribulations that every car club or organization experiences. Sometimes life can throw us all a curve and these guys really prove that optimism and good times will always be our motivation to get through the bad times. This is why today, the club continues to succeed; they have a membership that builds on the future, lives for the moment, and respects the past.

After 30 years, Society Car Club of Mesa, AZ., still plays a distinctive role in Lowriding, as its members are active within the Lowrider community and the communities they live in as well. The Society collective comprises business owners, managers, and responsible individuals who are respectable and productive people, and it takes members of this caliber to instill the Society Car Club ethos to the next generation of club members. This moral fiber has allowed the Society family to flourish as well. Over the past three decades, the club has learned that it doesn’t end with each member; for true success, the club must constantly branch out as a family venture. Each member’s wife or significant other is partially responsible for the club’s overall success, and it is the family that will carry the club’s tradition forward. Each generation serves the other; whether in the form children helping dad build his ride, or a father helping his child build their first Lowrider bike, pedal car, or first street project, the Society tradition carries on. That’s the Society way.