Newsletter
Sign Up today for our FREE Newsletter and get the latest articles and news delivered right to your inbox.
Home » Las Vegas Super Show 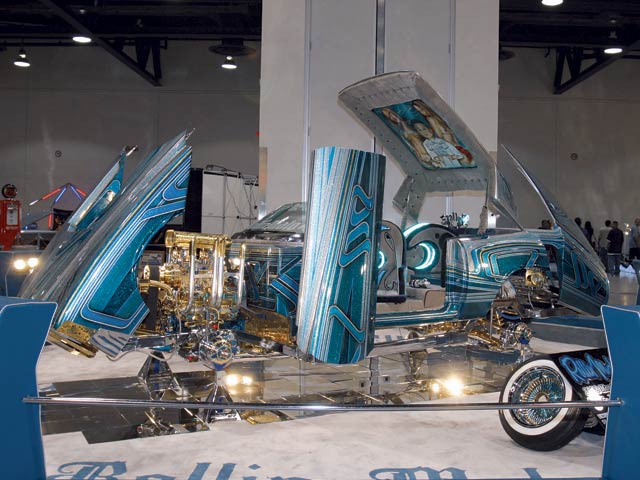 Being in Las Vegas, Nevada, for the annual Lowrider Magazine Super Show has always provided new experiences for us. Even the trip to the show this past year was an experience. While driving to Vegas on the Friday evening of Super Show weekend we saw a caravan of lowriders slowly cruising to the big event. The scenery on the road was quite a sight, and we were more excited about the Super Show than ever as we passed up the slow-moving caravan of vehicles with chrome, flakes and mirror-like paint finishes.

But the road to Super Show success is never easy. This year’s main event took place just north of downtown Las Vegas at Cashman Field on October 10. The 2004 Evolution Tour was put on with the help of sponsors Quaker State, Nitto Tires, U.S. Army, Exide Batteries, CCE Hydraulics, Player Wire Wheels and Limited Alloy Wheels. We thank them for their support in making it all happen.

The show itself was great. In fact, it was probably one of the magazine’s biggest Super Shows ever. All of us kept busy all weekend as there was a countless number of quality vehicles being displayed. From indoors to out, it was a good show that had a little something for everybody to enjoy. If you like old bombs, there were several clean vintage classics in the house. If you’re into the newer-style rides, the show had mucho pimped-out new age cruisers. If traditional lowriders are your thing, the show had those, too. If you’re into girls (like most of us are), the Cashman Field facility attracted a large number of car show cuties who came out in force. The Super Show crowd came in from all over the country to enjoy a weekend of warm sun, great cars, good music and an electrifying atmosphere.

The outdoor scene seemed to glimmer across the asphalt for almost as far as the eye could see as a mass of cars were on display outside. Being the “new guy,” LRM staffer Edgar Hoill was assigned the outdoor beat, and we thought that he was going to pass out when he saw the amount of cars that were on display. Edgar handled the assignment like a pro, though the sun shimmering on the east side of the facility made it difficult to shoot some cars.

We met a lot of car owners while walking the lot who were glad to meet us and were even more happy when we took a snapshot of their pride and joy. As we walked the show, photographing and taking down notes on more than 350 cars, the day started to get hotter and the crowd started to get bigger. After we had a chance to take a break, the sun was already on its way to the west side of the sky, so now we had the opportunity to shoot the other side of the show, all in an effort to make sure that we had enough shots to cover the event.

As the day went by, we met a lot of people and fans of the magazine, like the guys from Old Times Car Club who drove more than 10 hours from Fresno, California, to make it to the show. We saw Texans who had to deal with more than a day’s drive to be in Vegas. The Texas contingent included Phaylanx, Latin Kustoms and Dallas C.C, plus some Texas chapters of Rollerz Only C.C. Other clubs making the Super Show scene were Uce, Casual, Firme Image, Elite, Royals, Desirable Ones, La Familia, Majestics and many more. Some of us on the staff had never realized the amount of time and sweat that these competitors give of themselves for the sport of lowriding, but they surely opened our eyes to that fact this year and created an entirely new respect level. Thanks to them, this was the biggest Super Show that we’ve ever experienced.

The indoor segment of the show featured some of the best lowriders in the world and, again, they traveled from all over the country to compete in the final show of the year. The competition this year was fierce and there were quite a few cars that “broke out” at this year’s Super Show. Among the “break-outs” were Tony’s ’69 Chevy Impala from Lifestyle C.C., which featured a chameleon paint job, murals and a ’60s futuristic/retro leather interior. Anthony Fuentes broke out a yellow ’63 Impala that you really have to see in person to appreciate. With raw metal sections surrounded by painted and pinstriped sections, this undercarriage and frame are a rolling work of art.

There were cars indoors that you might not have recognized since they got totally flipped for the Super Show. We’re talking about rides like Thomas “Whitey” Neilly’s ’38 Chevy. Whitey’s hard work paid off as he won Best Bomb of the show. Members of Imperials C.C. were celebrating their 40th anniversary and had up a large display with a timeline and pictures of the club’s history. Congratulations to them as they are truly one of the founding lowrider clubs and still going strong. One Luv C.C. was chillin’ literally with their logo carved into a 4-foot block of ice, while Royals C.C. rolled up to the hall with a car trailer loaded with wood chips. In the end, it paid off for them as they won Best Club Display.

Elsewhere, Eastside, Uce, Rollerz Only, Southside, Legions, Modern Times, Low Conspiracy, Uniques, Outstanding, Classic Memories, New Style, Elite and more were all reppin’ inside the hall and showing off their best cars. Speaking of bringing out their best, that’s exactly what Bowtie Connection did and they swept the Original ’69 and below class with ’58 and ’59 Impalas and a ‘57 Chevy Bel Air taking First, Second and Third. These three rides looked like they came fresh off of the showroom floor.

What can you say about a club whose numbers continue to grow and always shows up in force at every show? You can now say that their winners and, with that said, we would like to congratulate Uce C.C. for winning Lowrider Magazine’s Car Club of the Year for the second time, joining Rollerz Only as the only club to win this prestigious title twice. Kita and Jae came up to the stage to accept the award to chants of “Uce! Uce!”

The concert part of the show rocked as Tejano rap star Chingo Bling kicked things off with a few of his latest songs. The NB Ridaz performed next and the crowd loved their set that included their old school song “Lost in Love” and their latest hit “So Fly.” They left the crowd pumped for the man that they all came to see… “X.” Xzibit, that is, music artist and MTV’s Pimp My Ride host, who performed some lowriding classics from his Restless album like “Front 2 Back,” “Get Your Walk On” and “Alkaholik.” The “X-man” also performed some songs from his new album Weapons of Mass Destruction including the first single “Hey Now.”

Once X rocked the crowd and exited the venue, some of Sin City’s sexiest and most sinful females came out to play in the world famous Bikini Contest and take a chance on winning the $500 dollar First Place cash prize. After some impressive moves from all of the contestants, the lovely Tejana Anita won the contest with her mid-air splits and her skimpy Mexican flag bikini. The Bikini Contest concluded this year’s 2004 Evolution Tour grand finale.It seemed that everybody enjoyed the Super Show, as it was standing room only throughout the day. With such a successful ending to our 2004 Tour, we can’t wait for the new season to start in a few months. The 2005 Lowrider Tour kicks off in Miami, Florida, on January 16, 2005, and we know from experience that that day will be here before we know it.