Newsletter
Sign Up today for our FREE Newsletter and get the latest articles and news delivered right to your inbox.
Home » First in the West 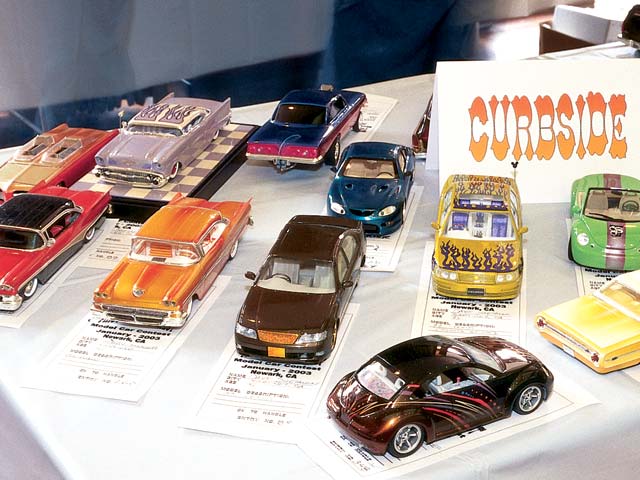 Anyone who thinks that model car building is in the slow lane is not in the right lane because on one recent Saturday at the Newark Community Center in Newark, California, the First in the West Model Car Contest and Swapmeet took place. Presented by Low Vintage Car Club, this was one of the coolest lowrider model car shows ever in the club history.

In fact, Low Vintage, a non-profit car club organization, helped produce the First Annual model car contest in only four months, which was the headed by former LRB cover modeler Miguel Murrillo, and two other club members, Ilya Smolyanitsky and Joe Estrada. Miguel and his fellow club members (some with real cars parked outside) have continued to keep the hobby alive by openly inviting more than 60 hobby entrants to display their most detailed 1/25-scale lows, which numbered about 680 incredibly detailed custom model cars from one end of the table to the other.

Then there were hundreds of spectators who crowded the Community Center to see all of the models maxed out in the 25 different categories. The all-day event (which ended at 5 p.m.) featured such categories and classes such as Seniors, Juniors and Kids. So with Miguel, Ilya and Joe working the phones, going to other shows and hobby shops to promote the event, they also enlisted 25 major show sponsors.The First in the West show was well organized right off the bat with Miguel in the lead and other Low Vintage club members and Silicon Valley Scale Vehicles club members helping set out more than 20 tables, with more being set up for the swapmeet portion and for the contest area as more model cars arrived. The trophy and prize table was enormously full with donated prizes like new model car kits, hobby tools and even an air compressor and a spray booth.

And just how would one win those coveted trophies? By letting your best work be judged by well-known and respected judges. The huge amount of donated prizes were raffled off to the attendees. Pro modeler Jay Holt from Southern California took home the bulk of the Lowrider Bicycle prizes for his green ’61 Chevy Impala, like T-shirts and tall glass Kool-Aid mugs and license plates for his real car. But let it be known that Jay had some pretty stiff and close competition.Among the many other winners in the various classes were Vicente Rosendo in the Lowrider Class A category for his ’39 Chevy delivery vehicle, Ferby Miguel in Radical Custom for his ’39 Chevy panel, Doug Wiseman in Street Rods for his ’41 Willys, John Franco in Modified Diecast for his ’56 Chevy Bel Air, Doug Midkiff in Trucks for his ’66 Chevy El Camino, Jerry Schilling in the Kids category for his ’63 Impala, Patricia Rosendo for Most Promising Modeler, Steve Travis in Best Interior for his ’34 Ford roadster, and Robert Burns from San Diego, California, won the Long Distance award.

With the tables full, we had our hands full as well, which made picking out the hottest models a difficult task. To be honest, though, they were all built with super-tight detail and creative imagination. But that’s what can be expected from the guys in the Bay Area. We’d hate to be a judges because we loved ’em all. For all of those who missed out this year, be sure to make your plans to attend the next First in the West Model Car Contest in 2004.