Newsletter
Sign Up today for our FREE Newsletter and get the latest articles and news delivered right to your inbox.
Home » Legends Tour Bikes 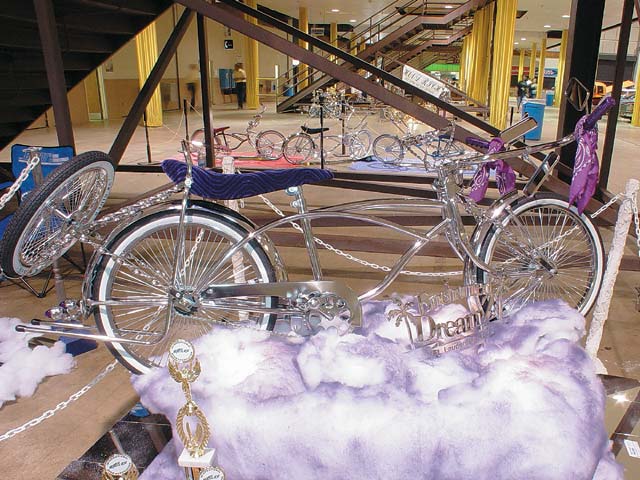 Well, it looks like the 2003 Lowrider Magazine Legends Tour is official! This year’s Tour is on an historic roll once again with 15 super shows all across this great nation with the very last Super Show claiming Bike and Trike of the Year titles happening in Las Vegas, Nevada, this October. That event will be here soon enough, as the Legends Tour picks up steam throughout the summer months. In this issue, we publish coverage of the first five Tour show stops in Miami, Florida; Fontana, California; Charlotte, North Carolina; Phoenix, Arizona; and Tampa, Florida.

We heard all kinds of comments on how lowriders just want to have fun and Go-Lo Entertainment and Lowrider Bicycle Magazine are in business to bring the excitement right to you! As a reminder to all of you friendly fans of the lowrider world, the Tour comes thanks to great sponsors like Quaker State, Nitto Tires, Black Magic, Player Wire Wheels, Exide Orbital Batteries, CCE Hydraulics and Limited Alloy Wheels.

Big and tall palm trees decorate Miami’s Youth Fair and Exposition Center. The Legends Tour kicked off the season early in the new year on January 12, and the Miami yielded some very interesting results in both the Bike and Trike classes. At trophy time, three guys who scored well above 100 were separated by only a few points. Enrique Garcia won First Place plus $250, Michael Linville (Finest Kreations B.C.) returned for Second and Danny Morales made it into the top three in Third. Please keep in mind that the total number of points that any bicycle and tricycle competitor can be given by the assigned judge is 250! Are tricycles more expensive to build? Maybe it depends on how far you’re willing to go with the cash flow. Riding into First Place in the Trike field was Robert Almeida, while Alex Quinones was judged to be Second and Gabriel Vargas (Street Kings B.C.) pedaled to Third Place. The point spread in this class was close, but none scored more than 100.

The freakin’ weekend in Miami was great but the future was in Fontana at the California Speedway on March 2. Neighborhood Dreams B.C. has been around for an amazing 10 years (like LRB). The club has been held together by club president Raul G., who was pretty happy to see his fellow club member Enedino Pelayo run away with First Place in Fontana. Capturing Second was Cesar Sandalla (Mulasas Del Tijuana) who led Third Place winner Hector Helano (Legions B.C.) by only one point. Martin Madrigal (Oldies B.C.) has his sights set on winning with a tricycle and he collected more than 100 points in the contest putting him in First Place indeed. Chris Chavez (Empire B.C.) arrived in Second and Gabriel Gonzalez (Oldies) won his family’s heart with Third.

Remember that the Legends Tour is a nationwide parade, so from the West Coast to the East, we next landed in Charlotte, North Carolina, at the Metrolina Expo Center on March 16 and a little bit closer to the grand finale in Las Vegas. Carlos Zamudio (Empire) and his ’69 Schwinn Sting-Ray seem to be on the fast track by winning First Place in the Tarheel State. Carlos also scored more than 100 points, as did Alfonso Cabral, Jr., who sailed into Second while Ryan Brenneman grasped Third and just made the 100 point mark. In the Trike class, First Place champ Angel Cruz (Drastic B.C.) almost topped the 150-point mark, while his competitors ranged far below. Randy Ramdass (Low Mentality B.C.) placed Second and Lae Gonzalez (Por Vida B.C.) scored well for Third.

Lowrider Magazine has an 18-wheel hauler for the Tour and all-pro driver Clay Bunch logs the miles. From Charlotte, Clay drove the truck and trailer all of the way to the Grand Canyon State of Arizona for our March 30 show at the Arizona State Fairgrounds in Phoenix. If we didn’t have a picture of First Place Bicycle champion Sebastian Paz, you would not believe it. Well, we got the shot of this world-class custom bike themed after the man of steel, Superman. Sebastian’s points score was up near the 200-point range (with a 45 point difference between First and Second and slightly more for Third), but carrying a little piece of kryptonite to weaken the superhero was Alfonso Cabral, Jr. (Outstanding B.C.) in Second. Veteran competitor Walter Portillo (Finest Kreations) stepped into the realm of Third Place, but like all serious lowriders, the push to reach the top spot will continue. The Trike contest was just as heated with the points margin coming down to the wire for the latest sweepstakes trio. Timmy Morales’ ’68 Schwinn scored more than 100 points for First Place and Jesse Cordova did the same for Second. Martin Madrigal arrived in Third Place.

Truck driver Clay was back on the road to Tampa, Florida, where there were some repeat performers in both classes on April 6 at the Florida State Fairgrounds. Stepping up to the First Place podium in the Sweepstakes chase was Isidro Juarez with the most points tallied in the race thus far, 200! Mike Linville (Finest Kreations) came back with a power punch in Second, while Matt Westinheiser pulled up the caboose in Third. Three are better than two! That depends on who you ask. Alex Quinones (Bottom Out B.C.) shone in First Place with more than 100 points, while David Escobedo (I Town B.C.) launched his way into Second but ducked under the 100-point mark. Gabriel Vargas (Street Kings B.C.) also came in under the century mark, but he (along with the rest) had to be somewhat happy because the Sweepstakes contest is no piece of cake with so much respect riding on a title shot.Remember, fellas, all roads lead to Las Vegas on October 5, where the best of the best will be crowned Lowrider Bicycle and Tricycle of the Year…and don’t you forget it.