Newsletter
Sign Up today for our FREE Newsletter and get the latest articles and news delivered right to your inbox.
Home » PhoenixHOP 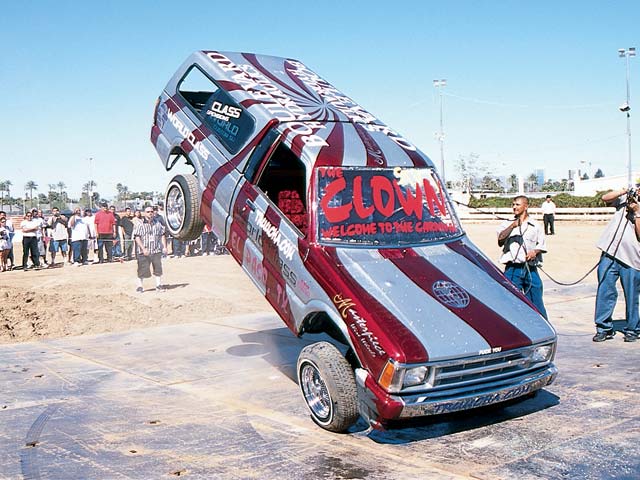 The cool breeze blowing across the Arizona State Fairgrounds made for the ideal complement to a successful show; not too hot, yet not freezing. In other words, just perfect for the 20-plus hoppers and dancers who came out to show their moves. Starting off the CCE Hydraulic-sponsored Southwest showdown was Brett Kopitz with his radical, custom-built Olds Cutlass, “C-Wrecks,” designed to roll at flip of a switch.

Once the Cutlass was finished performing, the Single-Pump class competitors started to roll in. The first to perform was Jose Madrigal with his ’86 Chevy Monte Carlo, which leapt to 29 inches and the class victory. Second Place was won by Chris Arreguin, whose candy red ’89 Mercury Grand Marquis hopped to 23 inches. There was no Third Place as the class only had two competitors. The Double-Pump class had only one competitor and that was Agustin Gomez of Lugo’s Hydraulics from Oxnard, California. Augie hit 54 inches, breaking the old 52-inch record set back in Miami, Florida, by Frank Carralero.

The Radical Hop class seemed to be the most intense as it had four competitors who came out to swing. First up was Herman Dominguez, who was nearly disqualified for not having a bumper on his candy blue ’95 Cadillac. After slipping it back on within the 3-minute time limit, Herman’s big body set the pace at 48 inches. Next up was Jorge Guzman with his “Chucky” ’87 black Toyota. Jorge and brother Jose set up the truck before he had Chucky climb to a standstill measuring 122 inches, which broke the old 114-inch record set by Jeffrey Fried in Charlotte, North Carolina. Next up was George Wood with his ’78 Monte Carlo, which maxed out at 46 inches. Last on the roster was Mike Moreno with his Red’s-equipped ’86 Mazda. Mike snuck into Second Place as his Mazda reached 62 inches to ensure him some prize money.

The Truck Hop was next on the agenda. The two competitors in the truck showdown turned the class into a battle of the Ford Rangers. First up was Ernie Lopez with his yellow ’86 Ranger setting the pace at 60 inches. Next up all the way from Texas was Sotero “Shorty” Villareal with his Red’s-equipped ’92 Ranger. The “Texas Ranger” started off with minor troubles but was able to get a rhythm going and hit 72 inches. Shorty got the win, but still fell short of breaking his own world record of 76 inches. The Luxury Hop was all about the ’50s as all four of the competitors hit more than 50 inches, which pleased the crowd. The first of the four was C&L Hydraulics with their blue ’83 Cutlass, which hit 51 inches. Next up was Arizona local Quentin Gavin, whose ’82 Cutlass built by World Wide Hydraulics hit 55 inches. Jorge Guzman then rolled out a Boulevard Hydraulics-equipped ’87 Buick Regal and topped out at 54 inches. Last in the Luxury class was Caesar “Spanky” Martinez, who pulled out a beautiful candy blue ’87 Monte Carlo Luxury Sport. The candy MC wowed the crowd as it hit 62-inches breaking Spanky’s old 61-inch record set in Fontana, California.

The Street Car Dance class started off with TNT Towing’s ’84 Monte Carlo setting the pace at 10 points. George Washington was next up with his ’63 Chevy Impala. George was going good until his ’63 had difficulties and couldn’t finish off the required 90 seconds and scored zero. Tough break, G.W.! Last up was Jerry Lamm, who arned 25 points to win the Street Car Dance. Even though there was only one competitor in the Street Truck Dance class, he still had to come out and perform for 90 seconds to win the cash award. Marco Lujan of El Paso, Texas, brought out Billy’s ’87 Mazda and the high-flying truck still performed as if it had something to prove.

Coming in all of the way from Las Vegas, Nevada, to compete in the Radical Dance class was Ron Eggers with his ’94 Nissan Pathfinder. Ron got his “Voodoo” working as the truck scored 28 points.. Next up was the only other competitor on the roster, Peter Cuevas with his ’85 Cutlass. The convertible finish its routine, but fell short of First Place with a score of 15 points, still enough to ensure Second Place and a cash award.

The Phoenix Hop action was hot but we’re still in the early stages of the show season. We hope to see more new faces, as well as the crowd-pleasing veteran competitors who elevate the level of competition. Keep watching as we head out to our next Legends Tour stop in a city near you.