Newsletter
Sign Up today for our FREE Newsletter and get the latest articles and news delivered right to your inbox.
Home » Las Vegas Super Show 2002 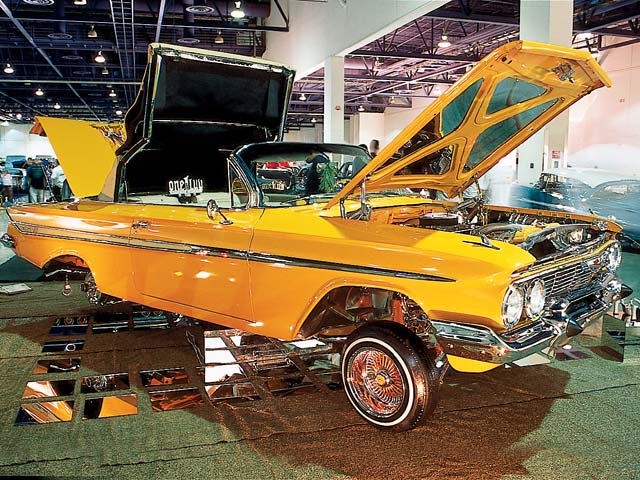 As Lowrider Magazine’s 2002 Scrapin’ Tour Super Show in Las Vegas, Nevada, got closer the hype began to grow in regard to who would come out to compete for the Lowrider of the Year titles. There were rumors of George Torrez breaking out a new version of his “Loco ’64” Chevy Impala at the show, but it will be at least another year before George returns. The next rumor to circulate concerned “Anaconda,” a radical ’63 Impala from Northern California, but that car turned out to be another no-show. Other notable no-shows included the three top Lowrider of the Year finishers from last year’s Super Show: Allen Lopez’ “Evil ’63” Impala, Angelo Salazar’s “Nightmares” ’68 Impala and Wayne Dickey’s “Violet Rose” ’66 Impala, all of which were already qualified for another run at the prestigious title.

Sponsors for this year’s Super Show held at Cashman Field included Quaker State, Gumout, Nitto Tires, Dayton Wire Wheels and Thump Records. The Super Show left its mark on the lowrider community again, as the final count included 450 vehicles being entered and close to 11,000 spectators enjoying the show. As we gathered in Las Vegas, the competitive tension grew as the contenders finally got a look at the playing field and the competition that had been previously kept a secret. What a difference a display with mirrors and lights can do to works of art generated from the streets. The artificial lights of the facility make the chrome gleam brighter and enhance a vibrant array of colors.

This year, as every year, the exhibitors had to prove during Saturday’s move-in that their vehicles were operational in order to compete. It was a bit extreme as most show contenders were not prepared for this call at the beginning of move-in, especially after the extra-long distances that many had to travel. But this opportunity also gave the radicals a chance to prove that they’re not just “pretty faces,” but actual moving machines.

As fate would have it, the first to roll up to the gate was Frank and Rosie Requena’s “Outer Limits” Chevy Fleetline, a road-worthy creation needing only some minor adjustments. Next up was Favian Garcia’s “Rollin’ Malo” with Derrick Jhagroo and his father, Roy, at the controls. They fired up the ’79 Chevy Monte Carlo from Rollerz Only Car Club and operated all of their features without a hitch in front of a crowd of onlookers.

The real upset of the move-in was towards the end of the day when “Chino” and “Lolo” Vega pulled into the staging area with their anticipated and revamped Monte Carlo, “Orgullo Mexicano.” The car rolled out and around the building with remote steering until fate in the form of a broken fuel pump put a stop to the wild antics. Unable to restart and perform its functions in the allotted time, the mighty Monte was eliminated from Sweepstakes competition and would be displayed on exhibition only status.

With the arena floor completely filled and the outside area growing, the show was coming to life. Every car in attendance was enhancing the experience. This year’s show was filled with the most full-custom and traditional lowriders that we’ve seen in a long time. Among the clubs that were out in full force was Las Vegas’ own Royals, who displayed a variety of rides. Other clubs supporting the event by showing their best rides included Desirable Ones, Premier, SouthSide, Rollerz Only, Los Angeles, South Central, Majestics, Outstanding, Brown Pride, Classic Memories, West Side, Latin World, Oldies, New Style, Low Creations, Royal Impressions, Drastic, Sophisticated Few, Flatlands, Old Memories, Admirables, Blvd. Kings, Blvd. Knights, Delegation, Dynasty, Kings of Kings, Night Crowd, One Luv, Reflections and Vegas Knights.

Once the judging was all squared away, the results were tallied and the winners were announced. In the Original Class, Chris Roark led the way with his ’57 Chevy Bel Air. Second Place was won by Ricardo Alvarado of Oldies C.C. and Third was won by Rafael Millan. Finishing First and Third in the Bomb class was Frank and Rosie Requena as their “Outer Limits” Fleetline topped the field and their popular ’48 Fleetline, “La Carcacha,” finished in Third Place. Sandwiched in the Second Place spot was Joe Phillips thanks to the strong showing of his “Funky ’51” Chevy.

Frank Silva blew away the Truck class competition with his completely redone and appropriately named Chevy S-10, “Deep Impact.” Settling for Second Place was Aaron Hodgson with Third Place the property of Ricky Sanchez. In the Euro class, defending champion Ronnie Payan won his second Euro of the Year title with his customized Nissan Sentra. Second Place was won by Reynaldo Rodriguez and Rick Fletes drove home with the Third Place Euro trophy.

In the Bomb Truck class, defending champion Alex Mercado proved to be the top dog once again with his “Greenade” vehicle. In Second Place was Marco Patino of Texas with Jay Mayfield positioned in Third. Topping the Traditional class was Brown Pride C.C. member Manuel Molina with his “Lay Low ’58” Impala LRM cover car. Second Place in this category was won by Glen Saiz with Third being awarded to Dara Chhay of SouthSide with his ’62 Impala.

In the much-anticipated and hotly contested Lowrider of the Year race, Texan Favian Garcia of Rollerz Only C.C. finished First with his “Rollin’ Malo” radically customized Monte Carlo. First-time winner Favian edged out fellow Rollerz Only member Robert Madrid, whose ’76 Monte Carlo “ShowTime” was more than worthy of top honors. Doug Vigil of New Style C.C. has been a familiar name in the winner’s circle the past few years, and he came through in 2002 with the Third Place spot in the Lowrider of the Year Sweepstakes thanks to his custom ’64 Impala.

The 2002 Super Show was definitely one for the records. It was a show filled with the strongest competition in virtually every class. It was a show that may have left those not in attendance bewildered by the loss of their titles, and without the gratification of competing against those who came to play. The grand finale to the 2002 Scrapin’ Tour was one to remember and preparations are already being made for next year in order to make the 2003 Legends Tour Super Show an even more spectacular event.