Newsletter
Sign Up today for our FREE Newsletter and get the latest articles and news delivered right to your inbox.
Home » Las Vegas Super Show Hop 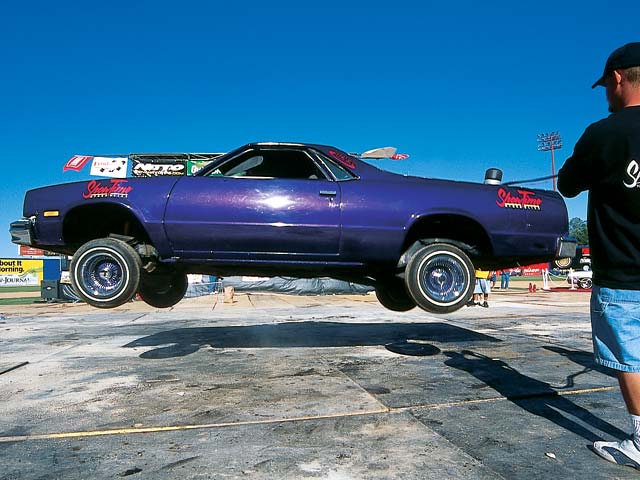 A capacity crowd at Cashman Field baseball stadium watched 45 of the best switchmen from coast to coast battle for the ShowTime-sponsored 2002 Super Show Hydraulics World Championship in the 50×50-foot “Ring Of Steel” set up at home plate. All hoppers and dancers had pre-qualified at previous 2002 Tour hops or sanctioned events by hitting 28 inches or higher, or placing at least second, respectively. So everyone was expecting to see some high-flying action–and they weren’t disappointed.

With DJ Kid Jay handling the musical accompaniment and our own Dennis Cervantes doing the announcing, the action began with the Truck Hop. Shorty Villareal’s ’92 Ford Ranger took First Place hopping 75 inches and setting a new 2002 Tour record. Second Place went to Jason Marchese who hit 70 inches with his ’87 Ranger mini and Jerry Sweeney took Third Place at 62 inches with his ’89 Mazda pickup.

Next up, the Single-Pump Car Hop class saw David Marquez win First Place at 50 inches with his ’63 Chevy Impala. Les Decker took Second Place with his ’63 Impala hitting 41 inches and Third Place went to Eddie Baeza, reaching 42 inches with his ’63 Impala. Only two entries qualified for the Double-Pump Car Hop, which wound up in a two-way tie for First Place with Augie Gomez’ ’61 Impala and Marco Perea’s ’61 Impala both hitting 60 inches and setting a new 2002 Tour record. The Luxury Hop was a very popular hop class, with First Place going to Caesar Martinez, who hit 56 inches with his ’87 Chevy Monte Carlo. Tieing for Second Place at 50 inches was Jesus Gonzalez, Jr. with his ’84 Olds Cutlass and Alejandro Vega’s ’85 Cutlass.

At around 1 p.m., the Hop was stopped for the conclusion of the Gumout ’64 Impala giveaway contest. This year, Robert Sladky (the Las Vegas radio contest key winner) drew the seventh key, a lucky number for him as the car started right up, much to his surprise and amazement. Congratulations! (See the Gumout Giveaway story elsewhere in this issue.) Then, the hydraulics competition continued with the new Radical Hop class and the two men who dominated it going head to head for the championship. Shorty Villareal hopped his ’86 Mazda pickup until it stood on end, winning First Place and setting a new 2002 Tour Record of 112 inches. Perennial favorite Jorge Guzman had a mechanical problem and wasn’t able to compete officially. However, he repaired the problem and put on an exhibition hop for the appreciative audience, standing his ’87 Toyota on the tailgate at 86 inches.

The Car and Truck Dance classes have become the most popular, this year fielding nearly two-dozen entries. There was plenty of “tear it up” action by every contestant, making it tough for the judges to pick the winners and causing some favorites to break down before the required 90 seconds. In the Car Dance-Street class, Juan Chavoya won First Place, earning 27 points with his ’87 Cutlass. Second Place went to Leonardo Gonzalez, whose ’81 Cutlass earned 24 points, and Fernando Casas captured Third Place with a score of 23 points for his ’81 Cutlass.

The Truck Dance-Street class was exciting to say the least. First Place with a perfect 30 points went to Brett Kopitz who “flipped” his ’88 Nissan on its top. Then, after setting it upright again, he kept on dancing and flipped it two more times. Juan Chavoya wasn’t far behind, taking Second Place at 27 points with his wild ’87 Mazda. Third Place honors went to Mike Kaufman who earned 25 points with his ‘80 Chevy El Camino.

Then, another short break was taken to honor the memory of our lost friend, hydraulics competitor Wayne Costa. This year, Wayne’s parents also started a tradition by presenting the First Annual Wayne Costa Award and $200 to Ron Eggers for his competitive spirit and sportsmanship throughout the 2002 Tour.

Last but not least, the Radical Car/Truck Dance class where anything goes was up. First Place went to John Markiewitz, earning 21 points with his ’88 Mazda pickup and his second consecutive Super Show victory. Juan Galvan won Second Place, receiving 15 points with his ’86 Chevy Blazer. And, proving that everyone has a bad day, two-time Super Show champion Ron Eggers suffered solenoid problems with his ’94 Nissan Pathfinder, but still took Third Place with 13 points.

With several previous 2002 Tour records broken, it was an awesome show and a super way to end a super season. It was truly a coast-to-coast competition as well, with entries from California, Florida, Indiana, Illinois, Kentucky, Michigan, Missouri, Nevada, Texas, Utah and even New York. The LRM staff sends out special thanks to our sponsors, the hop judges, stick crew, contestants and everyone who helped make the 2002 Tour finale a success. We couldn’t have done it without you. Kudos also to “Vegas” Mark Clayton and Martha DePaul, for keeping the records straight and making sure that the daily double and world record bonuses went out to everyone–on time.