Newsletter
Sign Up today for our FREE Newsletter and get the latest articles and news delivered right to your inbox.
Home » Scrapin’ 2002 Tour 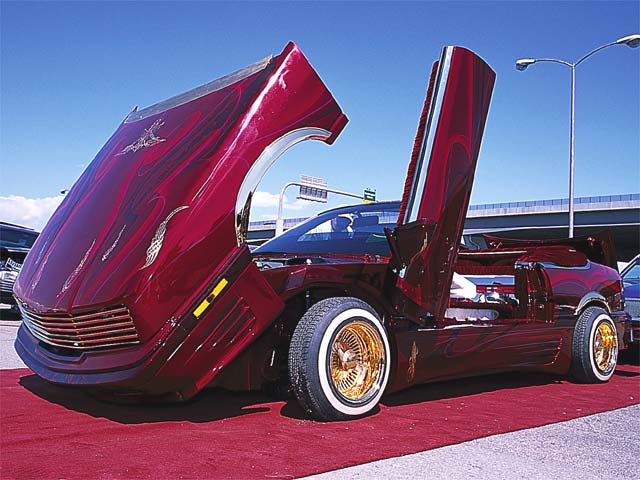 When we last left off our coverage of the 2002 Lowrider Magazine Scrapin’ Tour, we were in the Lone Star State trying to keep cool from the extreme heat at our indoor event held at the Reliant Arena in Houston, Texas. With the Houston weather a little too hot to handle, LRE was happy to take a trip to the next Tour stop at the Denver Coliseum in Denver, Colorado. The altitude of the Mile High City is high (5,300 feet above sea level) but the level of competition was even higher.

The Euro nation was in full effect and they weren’t holding back. All of the rides in the Coliseum were out of control and no stone was left unturned when these cars were in development. But just like at every other LRM show, only three vehicles are allowed to enter the winner’s circle. Though he came in Third Place on this day, Jaron Broudnax outscored most everyone else by a wide margin for that position with his clean ’99 Mitsubishi Eclipse Spyder. The runner-up position was taken by Arthur Manzanares and his wild ’89 Toyota Corolla. As wild as Arthur’s ride was, there was still one more car wilder still. Ben Sellers swept the competition like the Los Angeles Lakers swept the New Jersey Nets in the NBA finals with his ’91 Pontiac, “Midnite Breeze.”

Our next Tour stop took us from the great heights of Denver to San Diego, California’s Qualcomm Stadium (13 feet above sea level). Coming just eight days after the Denver event, the LRE and Go-Lo Entertainment staffs had literally no rest in bringing custom car enthusiasts and our dedicated readers the best shows that we can. There were also some minor distractions in the morning, but cool devoted car show goers had their minds set on showing (and seeing) their cars no matter what because that’s what they love doing.

As the sun started to set, we all knew that it was time to announce the winners of the San Diego show. Third place was claimed by Angel Edwards and his ’89 Honda Accord, “Ghost of Pearls,” while Second Place was awarded to Rick Fletes and his “Max’d Out” ’91 Nissan Maxima, which sported a completely new look this year that made the competition take a second look. As awesome as the rest of the rides were, the judges couldn’t overlook Lowrider Euro of the Year Ronnie Payan and his well-known ’89 Nissan, “Sabor A Mi II,” which was displayed like a true champion.