Newsletter
Sign Up today for our FREE Newsletter and get the latest articles and news delivered right to your inbox.
Home » 25th Anniversary Tour I 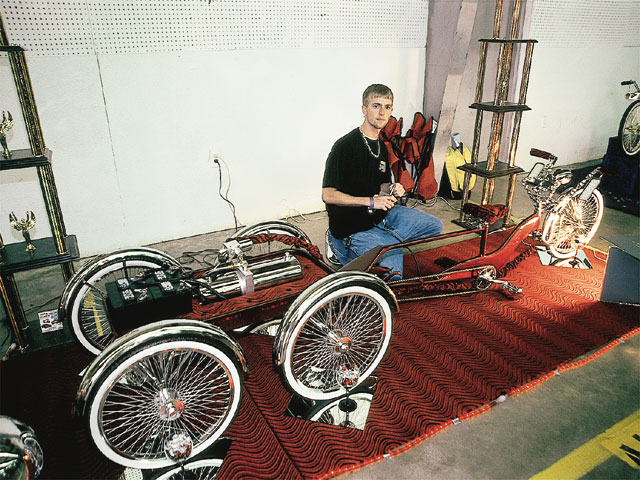 You may have seen our coverage of the first Lowrider Magazine 25th Anniversary Tour event in Miami, Florida, in the last issue of LRB. Well, that show seemed to initiate a chain reaction of hot bike action that virtually went Coast to Coast from San Bernardino, California, to Dallas, Texas, to Charlotte, North Carolina, and then back to Phoenix, Arizona. The entire Tour is being sponsored by none other than Pennzoil, Gumout, Dayton Wire Wheels, Nitto Tires, ShowTime Hydraulics, Gr8Ride.com and Thump Records. Without their support, these great shows wouldn’t be possible.

The second stop on our Tour after Miami was in San Bernardino, one of our favorite show locales. This show brought out a lot of heavy hitters, like Finest Kreations and Legions Bike Club. Those bad boys were packing some heat, but we can’t forget the brothers of destruction from Low Perfections, Mario and Josue Moreno, who brought out “Wild Suspense,” which, as a matter of fact, took home First Place in the Bike Sweepstakes. Rounding out the top three were the boys from Legions. Jose Garibay took home Second Place for his marvelous two-wheeler, and Daniel Cornejo settled for Third Place. The Trike Sweepstakes was claimed by Trike of the Year owner Randy Beard.

The next Tour stop was in Dallas, where the February show was filled with fun-filled enjoyment and excitement. Although all of the bikes in Dallas were winners, we all knew that only three bikes and one trike would claim Sweepstakes status by show’s end. As the awards drew closer, you could feel the electricity in the air. “Third Place… number 009,” was the announcement, and everyone looked around and saw James Torres stand up and quickly walk towards the stage to collect his award. When the first number of the three-digit entry was called out, Roland Longoria knew that he had placed Second with his bike, and he briskly walked to the stage to claim his prize. The only person left standing at that point was Isidro Juarez, who proudly collected his First Place trophy and money. The Trike Sweepstakes went to James Prado and the special awards went to an array of characters.

The turnout at the first-ever Charlotte Tour show surprised us as more than 300 cars, trucks and a bikes came to show and shine. Hometown heroes like Steve Tyre, Jose Leija and Josh Carpenter displayed their pedal-powered prize possessions, but like we said, only three bike builders can finish in the spotlight. In Charlotte, those three were Juan Carlos Zamudio, who took home First Place in the Bike Sweepstakes, Leo Martinez taking home Second Place and Rick Harrison finishing in Third Place. We can’t forget to mention Angel Cruz, who brought out a heavenly trike that took home the Trike Sweepstakes award. This response in Charlotte was encouraging and we’ll have to wait and see if we stop by again next year.

From there it was on to Phoenix, where as you might expect the weather was hot and sunny. In fact, the picture perfect day could not have been any better. Roland Longoria may have placed Second in Dallas, but he brought home First Place in Phoenix, along with a number of special awards. Roland’s bike is PHAT (pretty hot and tempting). The Second and Third Place winners came down to the matter of points, both being clean bikes and all. Shocked but not surprised was Ryan Moore, who staked the runner-up award, barely beating late entry Sebastian Paz, who took home the Third Place trophy. Gene Bare took the Trike Sweepstakes award with his radical three-wheeler.

That ends our show coverage for now, but don’t forget that we still have 15 official Tour shows to go, not to mention all of the non-official shows that we like to cover too. So check out LRB for further custom bike show action. Where else?