Newsletter
Sign Up today for our FREE Newsletter and get the latest articles and news delivered right to your inbox.
Home » Cactus Classic 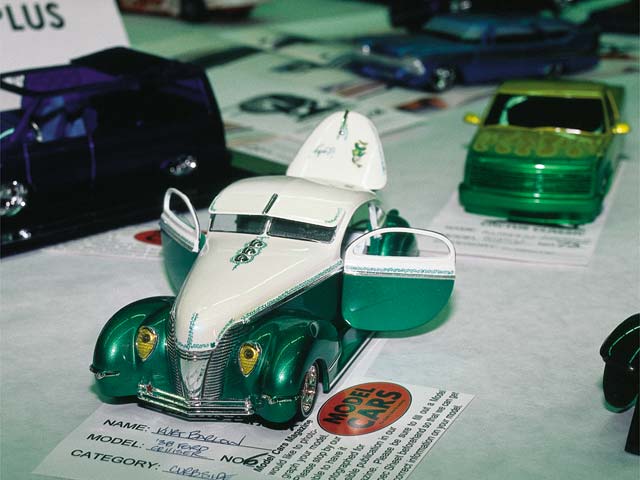 It was a great day for a model car show, and what better place to hold such an event than in Victorville, California? That was the site of the VIPMC (Vehicles In Plastic Model Club) and Victorville Parks, Recreation and Community Service Department’s eighth annual Cactus Classic Model Car Show, held at the Eighth Street Community Center. There were 22 categories of competition, including two new categories for this year’s event (Military Armor and Military Softskin).

The place was jumping and LRB was there to capture the moment. There were some great rides in Victorville, including those of our friend Mike Tellez, who busted out with a clean ’70 Chevy Monte Carlo “glasshouse.” Glasshouse, you ask? That’s right, Mike skillfully cut out a small side window in the back making the Monte look like a ’76 Chevy Caprice glasshouse.

Mike’s friend Anthony Arebalo showed his tangy tangerine orange ’39 Chevy panel and two-tone blue ’50 Chevy pickup, both of which looked better than ever. Anthony also brought out his friend MC Menace’s ’64 Chevy Impala that was fully detailed to the max. From its working driveshaft to operating gas lid, Menace’s ride has it all, you almost think that you can turn the key and go.

Also making his presence felt was newcomer Sal “Frog” Nunez, who broke out with a clean tangerine ’76 Caprice, a green ’66 Buick Riviera called “Gang Green,” and a root beer brown ’69 Rivi. We also had veteran Mark Wing on hand with all of his plastic art pieces, including his purple and white Ford Mustang, and two shortened specialties, a black ’59 Impala and green Cadillac.

Henry Espinoza drove all of the way from Huntington Park, California, to deliver some fine rides to the Cactus Classic, like his avocado green ’50 Chevy pickup, and a great ’38 Chevy convertible that was done up from floorboards to dash cluster. Henry also brought out a beautiful blue ’37 Chevy coupe and a slammed ’64 Impala wagon which sported some chrome wire wheels.

During the day, more and more spectators showed up to check out all of the fine plastic rides in Victorville, but as the day came to an end, awards were handed out to the top competitors in all 20-plus categories. As always, there were a few disappointed fellows, but hopefully those who didn’t win big will learn from the experience and come back strong later this year at the 2001 Cactus Classic. We here at LRB can’t wait because only the sharpest modelers show at the Cactus Classic.